Recessive Transition Mechanism of Arable Land Use Based on the Perspective of Coupling Coordination of Input–Output: A Case Study of 31 Provinces in China
Previous Article in Journal

What Role(s) Do Village Committees Play in the Withdrawal from Rural Homesteads? Evidence from Sichuan Province in Western China

Spatio-Temporal Evolution of Land Use Transition and Its Eco-Environmental Effects: A Case Study of the Yellow River Basin, China

Human activities and environmental deterioration have resulted in land use transition (LUT), which seriously affects the ecosystem service value (ESV) of its region. Therefore, relevant policy measures are urgently needed. Nevertheless, research on the relationships between LUTs and ESVs from the overall watershed scale is lacking. Thus, the geo-information Tupu method was applied to analyze the dynamic patterns of LUT based on land use data from 1990, 2000, 2010, and 2018 of the Yellow River Basin (YRB). Then, a newly revised ecosystem services calculation method was utilized to the responses of ESV to LUTs. The results indicated that the Tupu units of the LUT were mainly based on the mutual transformation of grassland and unused land, and cultivated land and forestland, which were widely distributed in the upper and middle reaches of the basin. The spatial distribution was concentrated, and the expansion’s trend was also obvious. Moreover, the conversion of cultivated land into construction land was mainly distributed in the lower reaches of the basin. During 1990–2018, the total ESV fluctuated and increased (+10.47 × 108 USD) in the YRB. Thereinto, the ESV of grassland (45%) and forestland (30%) made the greatest contribution to the total ESV. As for different reaches, the ESV increased in the upstream, but decreased in the midstream and the downstream. In terms of contribution rate, the conversion of unused land into grassland (12.477%) and grassland into forestland (9.856%) were the main types to enhance the ESV in the YRB, while the conversion of forestland into grassland (−8.047%) and grassland to unused land (−7.358%) were the main types to reduce the ESV. Furthermore, the range of ecological appreciation zones was widely distributed and scattered, while the range of ecological impairment zones was gradually expanded. These findings could have theoretical support and policy implications for land use planning and environmental services in the YRB. View Full-Text
Keywords: land use transition (LUT); ecosystem services value (ESV); geo-informatic Tupu; equivalent factor; the Yellow River Basin (YRB); China land use transition (LUT); ecosystem services value (ESV); geo-informatic Tupu; equivalent factor; the Yellow River Basin (YRB); China
►▼ Show Figures 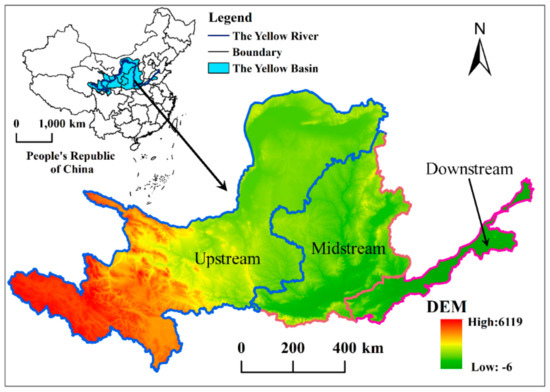