Environmental Conservation in the Tibetan Plateau Region: Lessons for China’s Belt and Road Initiative in the Mountains of Central Asia
Previous Article in Journal

This paper undertakes a comparative analysis of rural–urban land conversion policies in China and Vietnam, and examines the ideology of the state in land policymaking under a market socialism environment. It argues that land policies in both countries include ambiguous boundaries, which allow the socialist state to legitimize its politico-administrative power in land management and retain strong intervention capacity in the land market. In addition to similarities, land policies in China and Vietnam show significant differences in terms of the ownership of rural land and related legislation on land expropriation and transactions. Together, these distinctions cause divergent impacts on the interests and motivations of multiple stakeholders in rural land conversion. It is further observed that the state in both countries is characterized by dynamic, complex, and self-coordinated institutional systems, in which multiple levels of government have different driving forces and strategies in land development. The internal structure of authority in rural–urban land conversion between the multiple levels of government is readjusted by the regulatory land control of the central government. View Full-Text
Keywords: China; land policy; state; land conversion; Vietnam; rural; urban China; land policy; state; land conversion; Vietnam; rural; urban
►▼ Show Figures 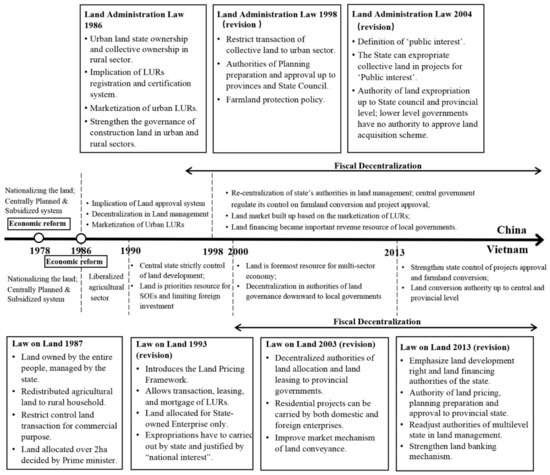