Crop coefficients (Kc) are important for the development of irrigation schedules, but few studies on Kc focus on saline soils. To propose the growth-stage-specific Kc values for sunflowers in saline soils, a two-year micro-plot experiment was conducted in Yichang Experimental Station, Hetao Irrigation District. Four salinity levels including non-salinized (ECe = 3.4–4.1 dS·m–1), low (ECe = 5.5–8.2 dS·m–1), moderate (ECe = 12.1–14.5 dS·m–1), and high (ECe = 18.3–18.5 dS·m–1) levels were arranged in 12 micro-plots. Based on the soil moisture observations, Vensim software was used to establish and develop a physically-based water flow in the soil-plant system (WFSP) model. Observations in 2012 were used to calibrate the WFSP model and acceptable accuracy was obtained, especially for soil moisture simulation below 5 cm (R2 > 0.6). The locally-based Kc values (LKc) of sunflowers in saline soils were presented according to the WFSP calibration results. To be specific, LKc for initial stages (Kc1) could be expressed as a function of soil salinity (R2 = 0.86), while R2 of LKc for rapid growth (Kc2), middle (Kc3), and mature (Kc4) stages were 0.659, 1.156, and 0.324, respectively. The proposed LKc values were also evaluated by observations in 2013 and the R2 for initial, rapid growth, middle, and mature stages were 0.66, 0.68, 0.56 and 0.58, respectively. It is expected that the LKc would be of great value in irrigation management and provide precise water application values for salt-affected regions. View Full-Text
Keywords: crop coefficient; modeling; salinity; sunflowers; Vensim crop coefficient; modeling; salinity; sunflowers; Vensim
►▼ Show Figures 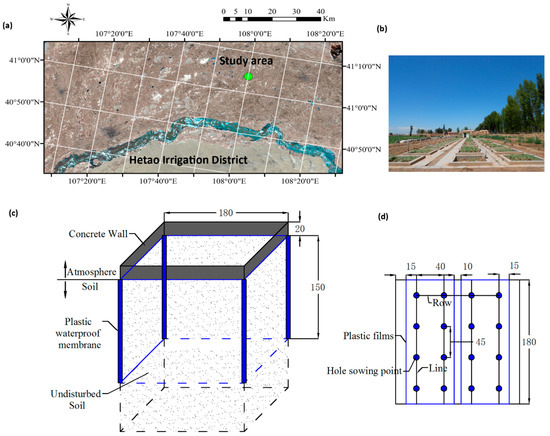