Current Status and Future Directions in Modeling a Transboundary Aquifer: A Case Study of Hueco Bolson
Previous Article in Journal

Modeling as a Tool for Transboundary Aquifer Assessment Prioritization

In 2016, research suggested there might be up to 36 transboundary aquifers located along the border between Mexico and the U.S. The main contribution of this study was to put together the available segments already existent in the literature without considering the validity of the criteria used to define the boundaries of those segments. In 2018, updated research reported 33 hydrogeological units (HGUs) crossing the boundaries between Mexico and Texas. This later analysis included the homogenization of geological nomenclatures, standardization of geological and hydrogeological criteria, using a specific methodology to correlate, identify, and delineate each HGU. The purpose of this paper is to use this latter methodology and expand the same analysis to include the transboundary aquifers between Baja California/California, Sonora/Arizona, and Chihuahua/New Mexico. Results of this study indicate that a total of 39 HGUs have been identified in this region which accounts for an approximate shareable land of 135,000 km2 where both countries share half of the area. From the total shareable area, around 40% reports good to moderate aquifer potential and water quality, of which 65% is in the U.S. and 35% on the Mexico side. Border-wide, the total number of HGUs in the border region between Mexico and the United States is 72, covering an approximate area of 315,000 km2 (180,000 km2 on the U.S. side and 135,000 km2 on the Mexico side). The total area that reports good to moderate aquifer potential as well as good to regular water quality ranges between 50 and 55% (of which approximately 60% is in the U.S. and the rest in Mexico). View Full-Text
Keywords: transboundary; aquifers; Mexico; United States; border; groundwater transboundary; aquifers; Mexico; United States; border; groundwater
►▼ Show Figures 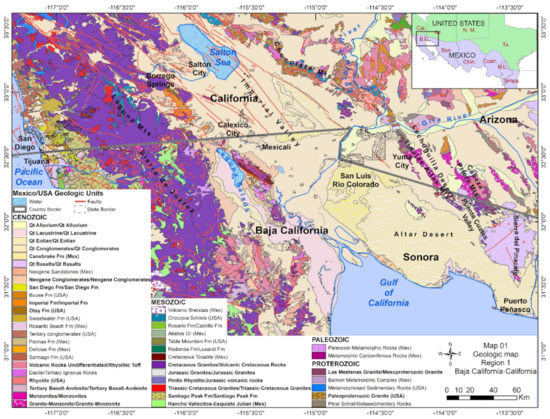