In north China, vegetables are always cultivated in conventional solar greenhouses (SG), however, these structures cannot be used during most of the winter due to extremely low temperatures. In this study, a new type of a solar greenhouse named sunken solar greenhouse (SSG), where the inside soil surface is lowered 1–2 m below outside and the back wall is 5–8 m width at the bottom and 1.5–2 m on top, was investigated. Inside climatic variables were recorded and compared with those outside during seven cucumber cultivation seasons. Crop evapotranspiration (ETc) was estimated using the Penman–Monteith method. Results show that inside solar radiation was reduced by approximately 40%, however days with a daily maximum inside temperature higher than 20 °C accounted for 80–90% of the days during the winter, which greatly enhanced cucumber fruit production compared to common SGs. The reference crop evapotranspiration (ETo) inside the SSG was reduced by 27% compared to outside. The estimated ETc was generally lower than 4 mm day−1, which resulted in a basal crop coefficient of 0.83. In conclusion, the SSG is environmental-friendly, preferable for winter vegetable cultivation in north China, and can be useful for other regions of the world with cold winter conditions. View Full-Text
Keywords: sunken solar greenhouse; microclimate; decoupling coefficient; crop evapotranspiration; north China sunken solar greenhouse; microclimate; decoupling coefficient; crop evapotranspiration; north China
►▼ Show Figures 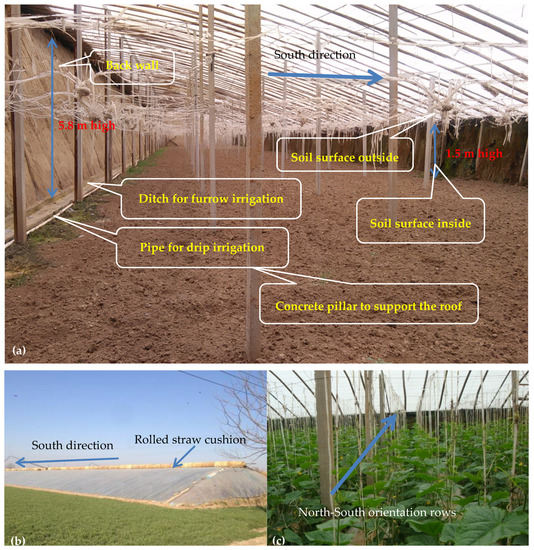