Evaluating the impact of climate change on water resources is necessary for improving water resource management and adaptation measures at the watershed level. This study evaluates the impact of climate change on streamflow in South Korea using downscaled climate change information based on the global climate model (GCM) and hydrological simulation program–FORTRAN model. Representative concentration pathway (RCP) scenarios 4.5 and 8.5 W/m2 were employed in this study. During the distant future (2071–2099), the flow increased by 15.11% and 24.40% for RCP scenarios 4.5 and 8.5 W/m2, respectively. The flow is highly dependent on precipitation and evapotranspiration. Both precipitation and evapotranspiration increased, but the relative change of precipitation was greater than the relative change of evapotranspiration. For this reason, the flow would show a significant increase. Additionally, for RCP 8.5 W/m2, the variability of the flow according to the GCM also increased because the variability of precipitation increased. Moreover, for RCP 8.5 W/m2, the summer and autumn flow increased significantly, and the winter flow decreased in both scenarios. The variability in autumn and winter was so great that the occurrence of extreme flow could intensify further. These projections indicated the possibility of future flooding and drought in summer and winter. Regionally, the flow was expected to show a significant increase in the southeastern region. The findings presented for South Korea could be used as primary data in establishing national climate change adaptation measures. View Full-Text
Keywords: climate change; RCP; GCM; HSPF; hydrological scenario; streamflow climate change; RCP; GCM; HSPF; hydrological scenario; streamflow
►▼ Show Figures 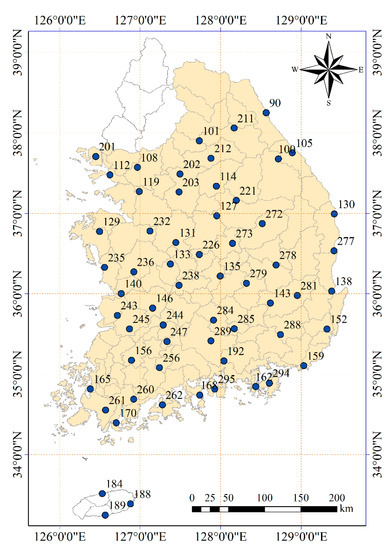