Regionalization techniques have been comprehensively discussed as the solution for runoff predictions in ungauged basins (PUB). Several types of regionalization approach have been proposed during the years. Among these, the physical similarity one was demonstrated to be one of the most robust. However, this method cannot be applied in large regions characterized by highly variable climatic conditions, such as sub-tropical areas. Therefore, this study aims to develop a new regionalization approach based on an enhanced concept of physical similarity to improve the runoff prediction of ungauged basins at country scale, under highly variable-weather conditions. A clustering method assured that watersheds with different hydrologic and physical characteristics were considered. The novelty of the proposed approach is based on the relationships found between rainfall-runoff model parameters and watershed-physiographic factors. These relationships were successively exported and validated at the ungauged basins. From the overall results, it can be concluded that the runoff prediction in the ungauged basins was very satisfactory. Therefore, the proposed approach can be adopted as an alternative method for runoff prediction in ungauged basins characterized by highly variable-climatic conditions. View Full-Text
Keywords: ungauged catchment; regionalization; physical similarity; hydrologic modeling; sub-tropical region; variable-climatic conditions ungauged catchment; regionalization; physical similarity; hydrologic modeling; sub-tropical region; variable-climatic conditions
►▼ Show Figures 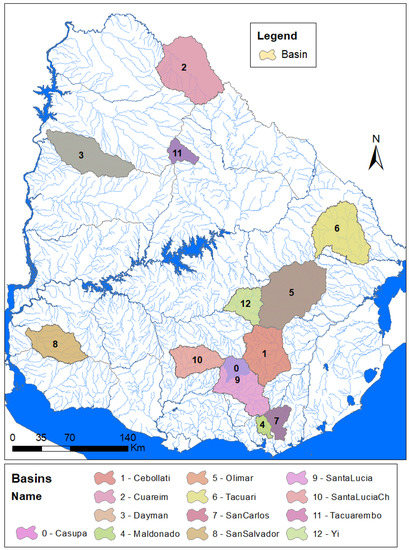