In this study the environmental impact of the anaerobic digestion (AD) of sewage sludge within an activated sludge wastewater treatment plant (WWTP) was investigated. Three alternative AD systems (mesophilic, thermophilic, and temperature-phased anaerobic digestion (TPAD)) were compared to determine which system may have the best environmental performance. Two life cycle assessments (LCA) were performed considering: (i) the whole WWTP (for a functional unit (FU) of 1 m3 of treated wastewater), and (ii) the sludge line (SL) alone (for FU of 1 m3 of produced methane). The data for the LCA were obtained from previous laboratory experimental work in combination with full-scale WWTP and literature. According to the results, the WWTP with TPAD outperforms those with mesophilic and thermophilic AD in most analyzed impact categories (i.e., Human toxicity, Ionizing radiation, Metal and Fossil depletion, Agricultural land occupation, Terrestrial acidification, Freshwater eutrophication, and Ozone depletion), except for Climate change where the WWTP with mesophilic AD performed better than with TPAD by 7%. In the case of the SL alone, the production of heat and electricity (here accounted for as avoided environmental impacts) led to credits in most of the analyzed impact categories except for Human toxicity where credits did not balance out the impacts caused by the wastewater treatment system. The best AD alternative was thermophilic concerning all environmental impact categories, besides Climate change and Human toxicity. Differences between both LCA results may be attributed to the FU. View Full-Text
Keywords: anaerobic digestion (AD); biogas; life cycle assessment (LCA); methane; waste activated sludge (WAS); wastewater treatment plant (WWTP) anaerobic digestion (AD); biogas; life cycle assessment (LCA); methane; waste activated sludge (WAS); wastewater treatment plant (WWTP)
►▼ Show Figures 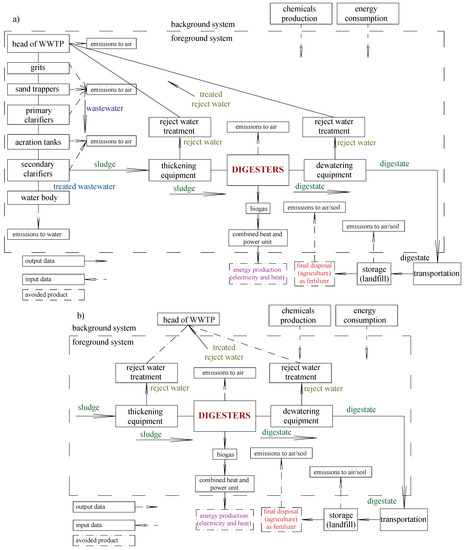