How Are Various Surrogate Indicators Consistent with Mechanical Reliability of Water Distribution Systems: From a Perspective of Many-Objective Optimization
Next Article in Special Issue

GLOF Risk Assessment Model in the Himalayas: A Case Study of a Hydropower Project in the Upper Arun River
Previous Article in Journal

Change in glacier area in the Kuksu and Kunes river basins, which are tributaries to the internationally important Ile River, were assessed at two different time steps between 1962/63, 1990/93, and 2010/12. Overall, glaciers lost 191.3 ± 16.8 km2 or 36.9 ± 6.5% of the initial area. Glacier wastage intensified in the latter period: While in 1962/63–1990/93 glaciers were losing 0.5% a−1, in 1990/93–2010/12, they were losing 1.2% a−1. Streamflow of the Ile River and its tributaries do not exhibit statistically significant change during the vegetative period between May and September. Positive trends were observed in the Ile flow in autumn, winter, and early spring. By contrast, the calculation of the total runoff from the glacier surface (including snow and ice melt) using temperature-index method and runoff forming due to melting of multiyear ice estimated from changes in glacier volume at different time steps between the 1960s and 2010s, showed that their absolute values and their contribution to total river runoff declined since the 1980s. This change is attributed to a strong reduction in glacier area. View Full-Text
Keywords: glacier changes; Tien Shan mountains; glacier runoff glacier changes; Tien Shan mountains; glacier runoff
►▼ Show Figures 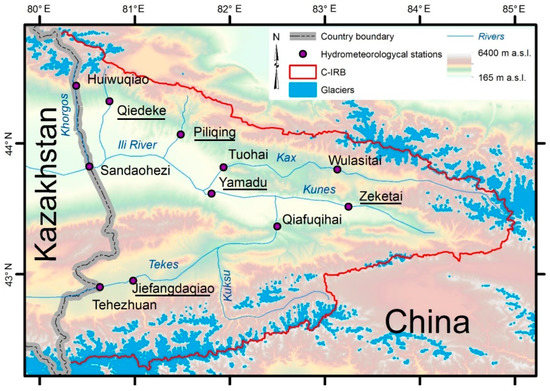