According to the accepted climate change scenarios, the future rainfall in the Korean peninsula is expected to increase by 3–10%. The expected increase in rainfall leads to an increase of runoff that is directly linked to the stability of existing and newly installed hydraulic structures. It is necessary to accurately estimate the future frequency and severity of floods, considering increasing rainfall according to different climate change scenarios. After collecting observed flood data over twenty years in 12 watersheds, we developed a regional frequency analysis (RFA) for ungauged watersheds by adjusting flood quantiles calculated by a design rainfall-runoff analysis (DRRA) using natural flow data as an index flood. The proposed RFA was applied to estimate design floods and flood risks in 113 medium-sized basins in South Korea according to representative concentration pathway (RCP) scenarios. Regarding the future of the Korean peninsula, compared with the present, the flood risks were expected to increase by 24.85% and 20.28% on average for the RCP 8.5 and 4.5 scenarios, respectively. View Full-Text
Keywords: regional flood frequency analysis; ungauged watershed; flood risk; RCP scenario regional flood frequency analysis; ungauged watershed; flood risk; RCP scenario
►▼ Show Figures 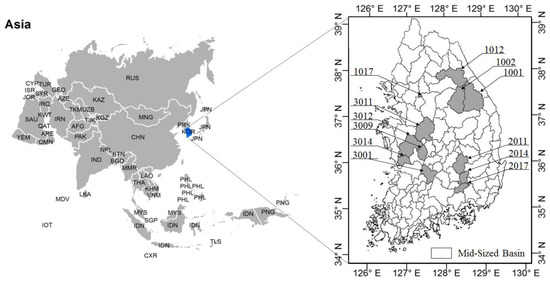