Ecology of aquatic microorganisms depends on a number of environmental parameters. The additional influence of anthropogenic factors is connected with sanitary risk, particularly in urban areas. The study was aimed at assessing the impact of physicochemical and biological parameters on the abundance and activity of bacterioplankton under different spatio-temporal conditions in the urbanized section of the Brda River. The evaluation of sanitary pollution of water was accompanied by the assessment of antibiotic resistance of isolated faecal strains determined using the disk diffusion method. The results indicate that the location of sampling sites significantly affected by the distribution of faecal Escherichia coli and enterococci in the studied part of the river. On the other hand, there were no significant seasonal changes in respiratory activity or abundance of planktonic bacteria. In addition, the abundance of bacterioplankton was not correlated with all measured physico-chemical parameters, though it was correlated with the organic carbon oxidation rate. Depending on the sampling site, bacterial cells with damaged membranes constituted between 8% and 20% of the population. Antibiograms showed the absence of multi-drug resistant strains. Enterococci exhibited the highest resistance to imipenem (45%), while Escherichia coli, to cefoxitin (31%). View Full-Text
Keywords: bacterioplankton; faecal bacteria; antibacterial resistance; river pollution; urbanization bacterioplankton; faecal bacteria; antibacterial resistance; river pollution; urbanization
►▼ Show Figures 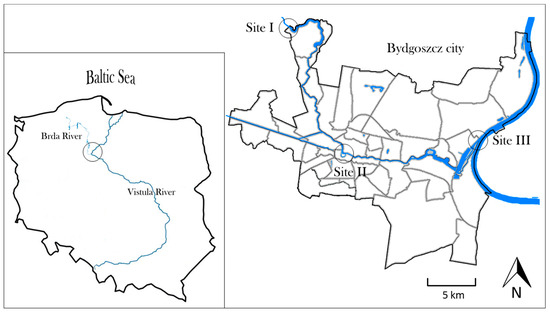