Ordered Mesoporous Carbons for Adsorption of Paracetamol and Non-Steroidal Anti-Inflammatory Drugs: Ibuprofen and Naproxen from Aqueous Solutions
Next Article in Special Issue

Many coastal cities are facing frequent flooding from storm events that are made worse by sea level rise and climate change. The groundwater table level in these low relief coastal cities is an important, but often overlooked, factor in the recurrent flooding these locations face. Infiltration of stormwater and water intrusion due to tidal forcing can cause already shallow groundwater tables to quickly rise toward the land surface. This decreases available storage which increases runoff, stormwater system loads, and flooding. Groundwater table forecasts, which could help inform the modeling and management of coastal flooding, are generally unavailable. This study explores two machine learning models, Long Short-term Memory (LSTM) networks and Recurrent Neural Networks (RNN), to model and forecast groundwater table response to storm events in the flood prone coastal city of Norfolk, Virginia. To determine the effect of training data type on model accuracy, two types of datasets (i) the continuous time series and (ii) a dataset of only storm events, created from observed groundwater table, rainfall, and sea level data from 2010–2018 are used to train and test the models. Additionally, a real-time groundwater table forecasting scenario was carried out to compare the models’ abilities to predict groundwater table levels given forecast rainfall and sea level as input data. When modeling the groundwater table with observed data, LSTM networks were found to have more predictive skill than RNNs (root mean squared error (RMSE) of 0.09 m versus 0.14 m, respectively). The real-time forecast scenario showed that models trained only on storm event data outperformed models trained on the continuous time series data (RMSE of 0.07 m versus 0.66 m, respectively) and that LSTM outperformed RNN models. Because models trained with the continuous time series data had much higher RMSE values, they were not suitable for predicting the groundwater table in the real-time scenario when using forecast input data. These results demonstrate the first use of LSTM networks to create hourly forecasts of groundwater table in a coastal city and show they are well suited for creating operational forecasts in real-time. As groundwater table levels increase due to sea level rise, forecasts of groundwater table will become an increasingly valuable part of coastal flood modeling and management. View Full-Text
Keywords: groundwater table; forecast; recurrent neural network; long short-term memory; coastal flooding groundwater table; forecast; recurrent neural network; long short-term memory; coastal flooding
►▼ Show Figures 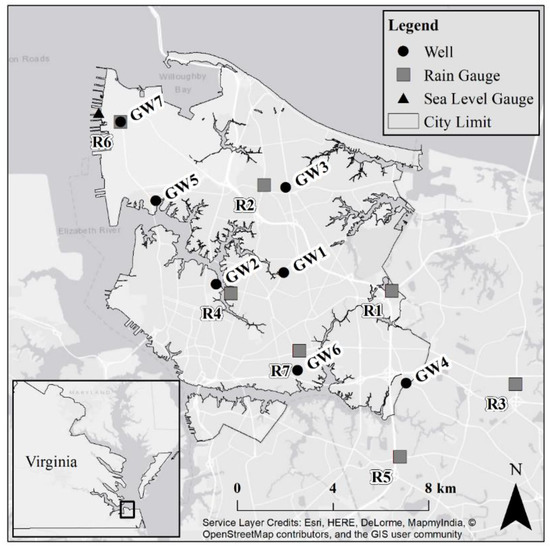