Flood Monitoring Based on the Study of Sentinel-1 SAR Images: The Ebro River Case Study

Drought is among the costliest natural disasters on both ecosystems and agroeconomics in China. However, most previous studies have used coarse resolution data or simply stopped short of investigating drought projection and its impact on crop yield. Motivated by the newly released higher-resolution climate projection dataset and the crucial need to assess the impact of climate change on agricultural production, the overarching goal of this study was to systematically and comprehensively predict future droughts at unprecedented resolutions over China as a whole. rather than region-specific projections, and then to further investigate its impact on crop yield by innovatively using a soil water deficit drought index. Methodologically, the drought projections were quantified from very high resolution climate data and further predicted impacts on crop yield over China using the standardized precipitation–evapotranspiration index (SPEI) at a relatively high (25 km) spatial resolution from NASA’s Earth Exchange Global Daily Downscaled Projections (NEX-GDDP). The results showed that (1) overall, China is projected to experience a significant decrease in SPEI (−0.15/decade under RCP (representative concentration pathway) 4.5; −0.14/decade under RCP8.5). Seasonally, the decreasing rate of SPEI is projected to be largest in winter (−0.2/decade and −0.31/decade) and the least in summer (−0.08/decade and −0.10/decade) under respective RCPs. (2) Regionally, winter/spring will get drier, especially at high latitudes/altitudes (North China and Tibetan plateau), and summer/autumn will get wetter in southern China. (3) Both the frequency and duration for medium and severe drought are projected to decrease, while extreme drought, particularly in high latitudes/altitudes, is projected to increase. (4) The percentage of the potential crop production affected by drought would increase to 36% (47%) by 2100 under RCP4.5 (RCP8.5). Especially, the ratio impacted by extreme drought is projected to increase over time and with much worse magnitude under RCP8.5; thus, adaptive crop policies are expected to address such a risk. View Full-Text
Keywords: drought trend; SPEI; CMIP5 projection; crop yield; China drought trend; SPEI; CMIP5 projection; crop yield; China
►▼ Show Figures 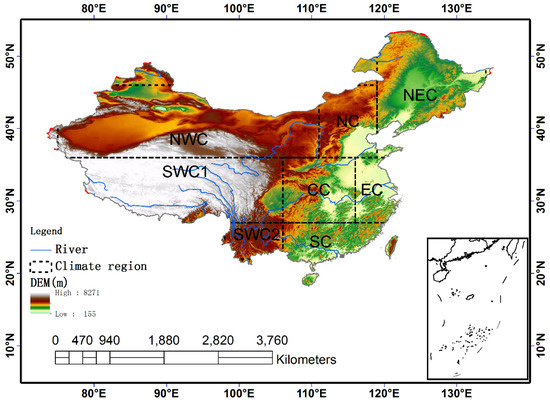