The province of Macerata, Italy, is a topographically complex region which has been little studied in terms of its temperature and precipitation climatology. Temperature data from 81 weather stations and precipitation data from 55 rain gauges were obtained, and, following quality control procedures, were investigated on the basis of 3 standard periods: 1931–1960, 1961–1990 and 1991–2014. Spatial and temporal variations in precipitation and temperature were analysed on the basis of six topographic variable (altitude, distance from the sea, latitude, distance from the closest river, aspect, and distance from the crest line). Of these, the relationship with altitude showed the strongest correlation. Use of GIS software allowed investigation of the most accurate way to present interpolations of these data and assessment of the differences between the 3 investigated periods. The results of the analyses permit a thorough evaluation of climate change spatially over the last 60 years. Generally, the amount of precipitation is diminished while the temperature is increased across the whole study area, but with significant variations within it. Temperature increased by 2 to 3 °C in the central part of the study area, while near the coast and in the mountains the change is between about 0 and 1 °C, with small decreases focused in the Appennine and foothill belt (−1 to 0 °C). For precipitation, the decrease is fairly uniform across the study area (between about 0–200 mm), but with some isolated areas of strong increase (200–300 mm) and only few parts of territory in which there is an increase of 0–200 mm, mainly in the southern part of the coast, to the south-west and inland immediately behind the coast. The monthly temperature trend is characterized by a constant growth, while for precipitation there is a strong decrease in the amount measured in January, February and October (between 25 and 35 mm on average). View Full-Text
Keywords: climate change; GIS; geostatistic; raster math climate change; GIS; geostatistic; raster math
►▼ Show Figures 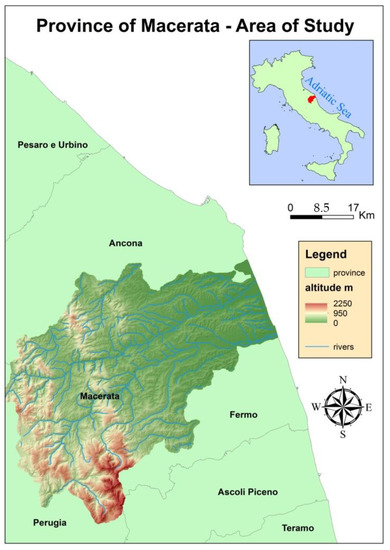