Continuous and accurate spatiotemporal precipitation data plays an important role in regional climate and hydrology research, particularly in the arid inland regions where rain gauges are sparse and unevenly distributed. The main objective of this study is to evaluate and bias-correct the Tropical Rainfall Measuring Mission (TRMM) 3B42V7 rainfall product under complex topographic and climatic conditions over the Hexi region in the northwest arid region of China with the reference of rain gauge observation data during 2009–2015. A series of statistical indicators were adopted to quantitatively evaluate the error of 3B42V7 and its ability in detecting precipitation events. Overall, the 3B42V7 overestimates the precipitation with Bias of 11.16%, and its performance generally becomes better with the increasing of time scale. The agreements between the rain gauge data and 3B42V7 are very low in cold season, and moderate in warm season. The 3B42V7 shows better correlation with rain gauges located in the southern mountainous and central oasis areas than in the northern extreme arid regions, and is more likely to underestimate the precipitation in high-altitude mountainous areas and overestimate the precipitation in low-elevation regions. The distribution of the error on the daily scale is more related to the elevation and rainfall than in monthly and annual scale. The 3B42V7 significantly overestimates the precipitation events, and the overestimation mainly focuses on tiny amounts of rainfall (0–1 mm/d), which is also the range of false alarm concentration. Bias correction for 3B42V7 was carried out based on the deviation of the average monthly precipitation data during 2009–2015. The bias-corrected 3B42V7 was significantly improved compared with the original product. Results suggest that regional assessment and bias correction of 3B42V7 rainfall product are of vital importance and will provide substantive reference for regional hydrological studies. View Full-Text
Keywords: TRMM 3B42V7; accuracy evaluation; bias correction; complex terrain; climatic transitional zone; northwest arid region TRMM 3B42V7; accuracy evaluation; bias correction; complex terrain; climatic transitional zone; northwest arid region
►▼ Show Figures 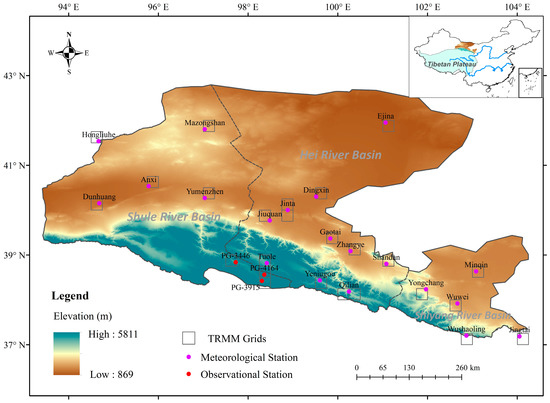