:
The disadvantage of radar measurements is that the obtained rainfall data is imprecise. Therefore, the use of radar data in hydrological applications usually requires correction. The main aim of the study was to verify and optimize various methods of estimating the rainfall depths for single events based on radar data, as well as determining their influence on the values of peak flow and outflow volume of hydrographs simulated using the SWMM (Storm Water Management Model) hydrodynamic model. Regression analyses were used to find a relationship between the rain gauge rainfall rate R and radar reflectivity Z for the urban catchment of the Służewiecki Stream in Warsaw, Poland. Five methods for determining calculational values of radar reflectivity in reference to specific rainfall cells with 1 km resolution within an event duration were applied. Moreover, the correction coefficient for data from the SRI (Surface Rainfall Intensity) product was established. The Z-R relationships determined in this study offer much better rainfall rate estimation as compared to Marshall-Palmer’s relationship. Different scenarios were applied to investigate the stream response to changes in rainfall depths estimated on the basis of radar data, in which the data both for 2 existing, as well as 64 virtual, rain gauges assigned to appropriate rainfall cells in the catchment were included. Relatively good agreement was achieved between the measured parameters of the hydrograph of flows and those simulated in response to rainfall depths which had been calculated for single events using the correction coefficient and the determined Z-R relationships. Radar estimates of rainfall depths based on the tested methods can be used as input data to the SWMM model for the purpose of simulating flows in the investigated urban catchment.
Keywords:
urban catchment; radar reflectivity; rainfall rate; Z-R relationship; SWMM model; flow simulation

2.1. Description of the Studied Area

In quantitative rainfall analysis, data registered at the Okęcie and Ursynów rainfall stations, located in the area of the analyzed Służewiecki Stream catchment in Warsaw, were applied. In the quantitative analysis regarding the flows, hydrographs measured in the Kłobucka and Rosoła cross-sections were used (see Figure 1).
The area of the subcatchment for the Kłobucka cross-section is 16.5 km2, with a share of effective impermeable surfaces (hydraulically connected with storm sewers) equal to approx. 23%. Warsaw Chopin Airport, from which rainwaters are directed to the Służewiecki Stream by a storm water drainage system, occupies the vast majority of the area of this catchment. The Służewiecki Stream, in the segment from its source to the Kłobucka cross-section (6.5 km in length), is closed along almost the entire length. In the area of the airport, retention tanks with a total capacity of 42,490 m3 are found, which have a large influence on the transformation of flows in the watercourse.
The area of the subcatchment to the Rosoła cross-section is 43.0 km2. The share of effective impermeable surfaces is approx. 26.0%. A part of this catchment, which is drained by the Grabowski Drainage Ditch, is mainly agricultural and forest-type land. The remaining part of the catchment, drained by a drainage system, is used for industrial, commercial, transportation and multi-family residential development purposes. It is characterized by a large share of impermeable surfaces. The average slope of the Służewiecki Stream is approx. 1.5‰, and slopes of the areas in the catchment are usually less than 1%.
Rainfall depths at the Okęcie and Ursynów rainfall stations were registered in an ongoing manner using SEBA electronic tipping bucket rain gauges. The first of them is controlled by the Institute of Meteorology and Water Management—National Research Institute (Polish: IMGW—PIB), while the second—by the Division of River Engineering in Warsaw University of Life Sciences—SGGW. Water levels on the basis of which flows were calculated were registered using a hydrostatic sensor of the “Diver” type.

2.2. The SWMM Model for the Studied Area

This research was partial supported by the National Science Centre in Poland (COST/210/2006). 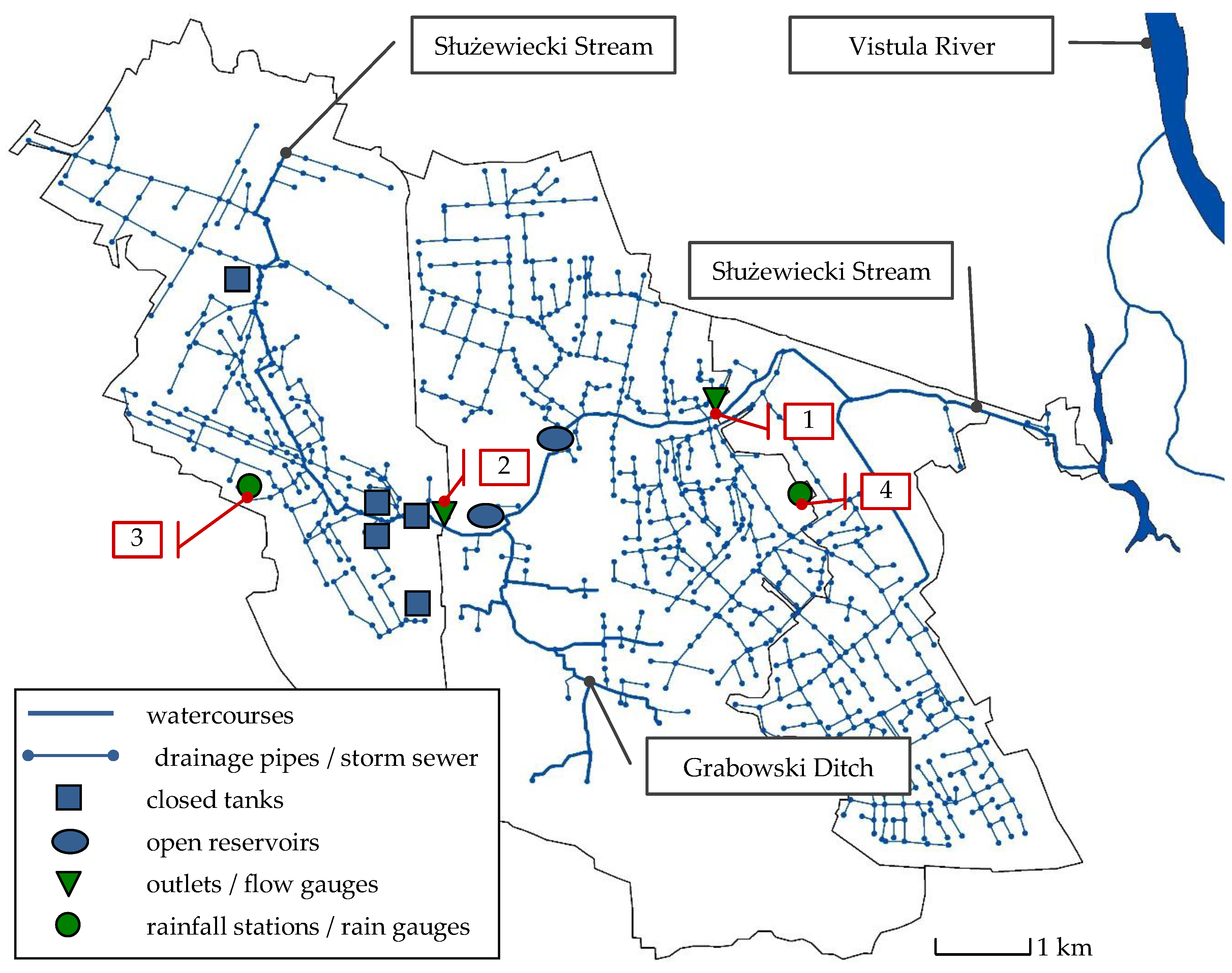