In the absence of long-series streamflow records in plain areas, design storm, which serves as the most important input in a hydrologic model, plays an important role in flood control and water resources management. For a large drainage basin, design storm may be estimated for sub-basins separately; thus the spatial distribution of design storm needs to be carefully treated. However, few studies have been carried out to evaluate the rationality of the spatial distribution in a design storm, which means the storm over space should be in accordance with actual needs or its distributing patterns. Taking the Tai Lake Basin (TLB), 3-d Copula-based models combining extreme rainfall of different sub-basins were built using long-term rainfall data, and conditional probabilities of sub-basins encountering certain amounts of rainfall were investigated to evaluate the rationality of the design storm. Results show that the spatial distribution of the design storm based on a typical year is hardly rational, in which rainfall of the northeastern part of the basin is suggested to be weakened while in the southwest to be strengthened; after the rainfall is redistributed based on long-term information, it shows a better rationality of spatial distribution. Such information provides valuable significance in guiding flood control of TLB, and the considered evaluating method can be used for similar basins in plain areas. View Full-Text
Keywords: Copula function; flood control planning; extreme rainfall; conditional probability; Tai Lake Basin; design storm Copula function; flood control planning; extreme rainfall; conditional probability; Tai Lake Basin; design storm
►▼ Show Figures 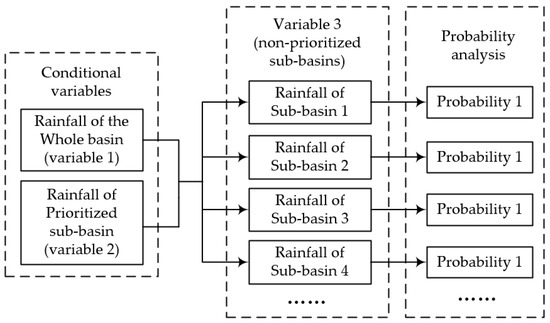