Evapotranspiration Partition and Crop Coefficients of Tifton 85 Bermudagrass as Affected by the Frequency of Cuttings. Application of the FAO56 Dual Kc Model

Straw amendment (SA) can be used to increase soil organic matter and decrease dioxide carbon emissions. However, the impact of SA on the crop yield is still subject to debate in different areas. In this study, soil temperature (ST), soil moisture (SM), soil bulk density, soil-available-nitrogen (AN), soil-available-phosphorus (AP), crop growth and yield were measured in SA and NSA (no straw amendment) at slope positions of a 130-m-long consecutive Mollisol slope during the maize (Zea mays) growth stages in the North Temperate Zone of China. Compared with NSA, the influence of SA on ST and SM was not consistent, while AN typically increased on the top slope. However, SA conventionally increased AP, increased daily ST and monthly ST (2.4–7.9%), and increased daily SM and monthly SM (2.1–12.5%) on the back slope. SA increased crop yield by 1–9.8% and 55.6–105.1% on the top and back slopes, respectively. At the bottom, SA conventionally decreased ST (0.20–1.48 °C in July and August), SM (3.5–29.6% from May to August), AN and AP, and decreased crop yield (4.1–30.6%). In conclusion, SA changed the equilibrium of ST and SM, influenced the dynamics of AN and AP on the consecutive slopes, and increased yield on both the top and back slopes but decreased yield at the bottom. View Full-Text
Keywords: soil moisture; soil temperature; soil nutrient; crop yield; Corn; Black soil soil moisture; soil temperature; soil nutrient; crop yield; Corn; Black soil
►▼ Show Figures 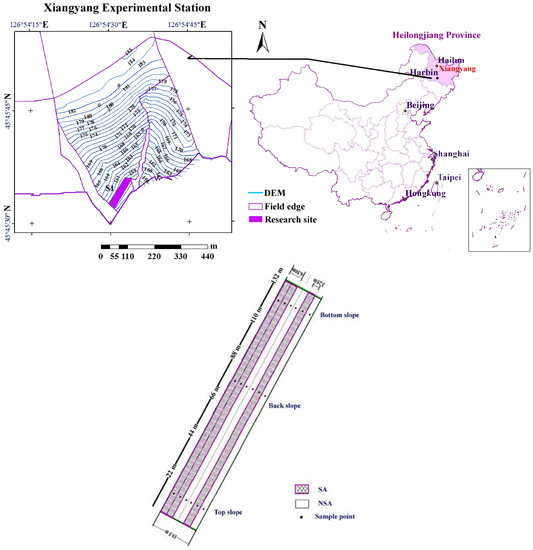