Observed Correlation between Aerosol and Cloud Base Height for Low Clouds at Baltimore and New York, United States
Previous Article in Special Issue

Atmospheric Distribution of PAHs and Quinones in the Gas and PM1 Phases in the Guadalajara Metropolitan Area, Mexico: Sources and Health Risk

Bonfire night is a worldwide phenomenon given to numerous annual celebrations characterised by bonfires and fireworks. Since Thailand has no national ambient air quality standards for metal particulates, it is important to investigate the impacts of particulate injections on elevations of air pollutants and the ecological health impacts resulting from firework displays. In this investigation, Pb and Ba were considered potential firework tracers because their concentrations were significantly higher during the episode, and lower than/comparable with minimum detection limits during other periods, indicating that their elevated concentrations were principally due to pyrotechnic displays. Pb/Ca, Pb/Al, Pb/Mg, and Pb/Cu can be used to pin-point emissions from firework displays. Air mass backward trajectories (72 h) from the Hybrid Single-Particle Lagrangian Integrated Trajectory (HYSPLIT) model indicated that areas east and north-east of the study site were the main sources of the airborne particles. Although the combined risk associated with levels of Pb, Cr, Co., Ni, Zn, As, Cd, V, and Mn was far below the standards mentioned in international guidelines, the lifetime cancer risks associated with As and Cr levels exceeded US-EPA guidelines, and may expose inhabitants of surrounding areas of Bangkok to an elevated cancer risk. View Full-Text
Keywords: firework displays; toxic metals; principal component analysis; risk assessment; hazard quotient; hazard index firework displays; toxic metals; principal component analysis; risk assessment; hazard quotient; hazard index
►▼ Show Figures 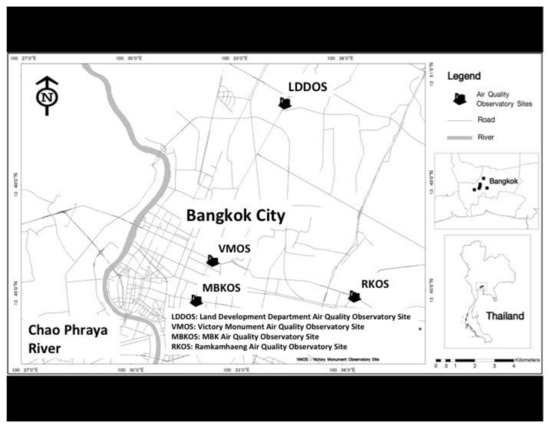