Atmospheric Moisture Pathways to the Highlands of the Tropical Andes: Analyzing the Effects of Spectral Nudging on Different Driving Fields for Regional Climate Modeling

Atmospheric moisture pathways to the highlands of the tropical Andes Mountains were investigated using the Weather Research and Forecasting (WRF) model, as well as back-trajectory analysis. To assess model uncertainties according to the initial and lateral boundary conditions (ILBCs), the effects of spectral nudging and different driving fields on regional climate modeling were tested. Based on the spatio-temporal patterns of the large-scale atmospheric features over South America, the results demonstrated that spectral nudging compared to traditional long-term integration generally produced greater consistency with the reference data (ERA5). These WRF simulations further revealed that the location of the inter-tropical convergence zone (ITCZ), as well as the precipitation over the Andes Mountains were better reproduced. To investigate the air mass pathways, the most accurate WRF simulation was used as atmospheric conditions for the back-trajectory calculations. Three subregions along the tropical Andean chain were considered. Based on mean cluster trajectories and the water vapor mixing ratio along the pathways, the contributions of eastern and western water sources were analyzed. In particular, the southernmost subregion illustrated a clear frequency of occurrences of Pacific trajectories mostly during September–November (40%) when the ITCZ is shifted to the Northern Hemisphere and the Bolivian high pressure system is weakened. In the northernmost subregion, Pacific air masses as well reached the Andes highlands with rather low frequencies regardless of the season (2–12%), but with a moisture contribution comparable to the eastern trajectories. Cross-sections of the equivalent-potential temperature as an indicator of the moisture and energy content of the atmosphere revealed a downward mixing of the moisture aloft, which was stronger in the southern subregion. Additionally, low-level onshore breezes, which developed in both subregions, indicated the transport of warm-moist marine air masses to the highlands, highlighting the importance of the representation of the terrain and, thus, the application of dynamical downscaling using regional climate models. View Full-Text
Keywords: atmospheric moisture pathways; Andes; WRF; back-trajectories; spectral nudging atmospheric moisture pathways; Andes; WRF; back-trajectories; spectral nudging
►▼ Show Figures 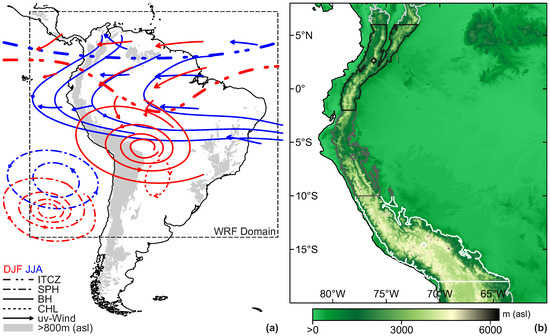 
Trachte, Katja. 2018. "Atmospheric Moisture Pathways to the Highlands of the Tropical Andes: Analyzing the Effects of Spectral Nudging on Different Driving Fields for Regional Climate Modeling" Atmosphere 9, no. 11: 456. https://doi.org/10.3390/atmos9110456