Numerical Study on the Urban Ventilation in Regulating Microclimate and Pollutant Dispersion in Urban Street Canyon: A Case Study of Nanjing New Region, China
Next Article in Special Issue

In this paper, we investigate why current state-of-the-art chemistry-climate models underestimate the tropospheric ozone increase from the 1950s to the 1990s by approximately 50%. The accuracy of these models is vital, not only for understanding and predicting air quality globally, but also since they are used to quantify the contribution of ozone in the troposphere and lower stratosphere to climate change, where its greenhouse effect is largest. We briefly describe available northern mid-latitude ozone measurements, which include representative and reliable data from European sites that extend back to the 1950s. We use the SOCOLv3 (Solar Climate Ozone Links version 3) global chemistry-climate model to investigate the individual terms of the tropospheric ozone budget. These include: inflow from the stratosphere, dry deposition, and chemical formation and destruction. For 1960 to 2000 SOCOLv3 indicates a tropospheric ozone increase at 850 hPa over the Swiss Alps (Arosa) of 17 ppb, or around 30%. This increase is smaller than that seen in the surface ozone measurements but similar to other chemistry-climate models, including those with more complex NMVOC (Non Methane Volatile Organic Compound) schemes than SOCOLv3’s. It is likely that the underestimated increase in tropospheric ozone could be explained by issues in the underlying emissions inventories used in the model simulations, with ozone precursor emissions, particularly NOx (NO + NO2), from the 1960s being too large. View Full-Text
Keywords: ozone; troposphere; climate change; long-term ozone changes; model evaluation; SOCOL ozone; troposphere; climate change; long-term ozone changes; model evaluation; SOCOL
►▼ Show Figures 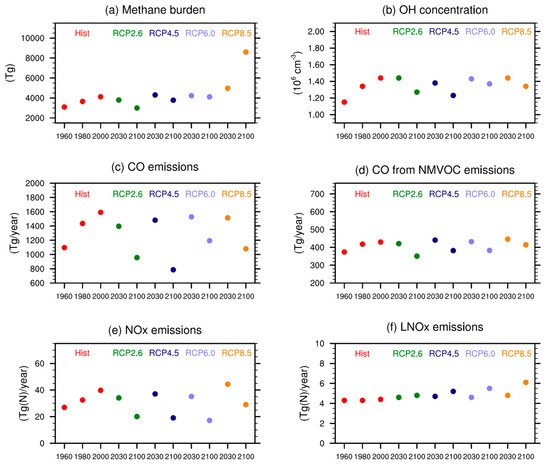