The Exceptionally Cold January of 2017 over the Balkan Peninsula: A Climatological and Synoptic Analysis
Previous Article in Journal

The Tibetan Plateau (TP), which is well known as “The Third Pole”, is of great importance to climate change in East Asia, and even the whole world. In this paper, we selected the monthly temperature (including the monthly mean and the maximum and minimum temperature) during 1971–2015 from 88 meteorological stations on the TP. The data were tested and corrected by using Penalized Maximal F Test (PMFT) based on RHtest. Afterwards, based on the Mann-Kendall test, we analyzed the seasonal and time-interval characteristics on each station in detail. The results show that the TP has experienced significant warming during 1971–2015. When comparing the selected elements, the warming rate of minimum temperature (Tmin) is the largest, the mean temperature (Tmean) comes second, and the maximum temperature (Tmax) is the smallest. The warming trends in four seasons are significant, and the highest warming rate occurs in winter. The warming trend on the TP has a prominent spatial difference, with a large warming rate on the eastern parts and a small one on the central regions. In different seasons, the warming trends on the TP have different characteristics in the time interval. Since 1998, the warming rate in spring increased markedly, spring has displaced winter as the season with the highest warming rate recently. View Full-Text
Keywords: Tibetan Plateau; temperature; homogenization; climate change; spatial-temporal characteristics Tibetan Plateau; temperature; homogenization; climate change; spatial-temporal characteristics
►▼ Show Figures 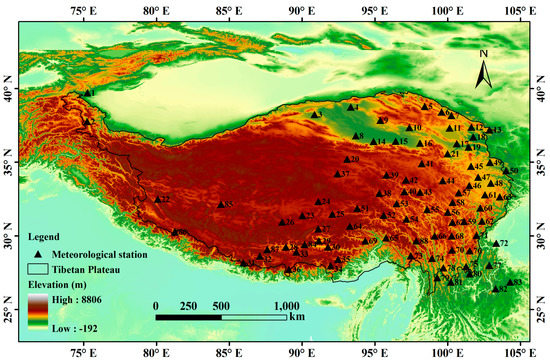