The Berg cloud feature in the atmosphere of Uranus was first identified as a persistent grouping of clouds located just off the bright South Polar Collar at a latitude of around −34 degrees. Ongoing observations of this feature through the 1990s and 2000s suggested that the feature was oscillating in location by a few degrees in latitude for several years, and then unexpectedly began to drift towards the equator, which continued over the final 4 years until the cloud dissipated. One possible explanation for such a persistent drifting cloud is that it is a cloud-vortex system, in which an unseen vortex drives the creation of the cloud and the motions of the vortex control the cloud location. To explore this possibility, a series of vortices are studied numerically using the Explicit Planetary Isentropic Coordinate General Circulation Model (EPIC GCM). The evolution of these test vortices are simulated to examine their drift rates and the potential for cloud formation. The results indicate that conditions on Uranus could result in an equatorward drifting vortex over a range of latitudes and that significant cloud formation could occur, potentially obscuring observations of the vortex. View Full-Text
Keywords: atmospheric simulation; Uranus; dark spots; geophysical vortex; cloud modeling atmospheric simulation; Uranus; dark spots; geophysical vortex; cloud modeling
►▼ Show Figures 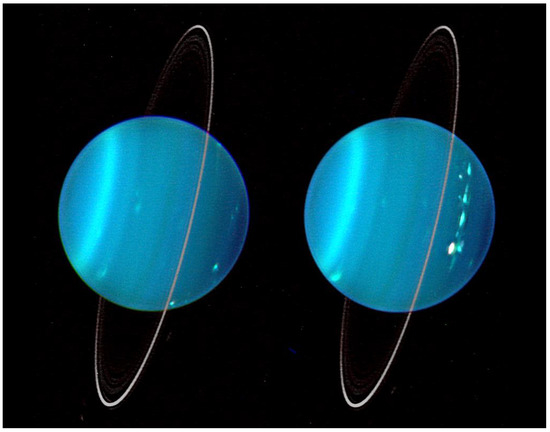