Steroid metabolism is a fundamental process in the porcine testis to provide testosterone but also estrogens and androstenone, which are essential for the physiology of the boar. This study concerns boars at an early stage of puberty. Using a RT-qPCR approach, we showed that the transcriptional activities of several genes providing key enzymes involved in this metabolism (such as CYP11A1) are correlated. Surprisingly, HSD17B3, a key gene for testosterone production, was absent from this group. An additional weighted gene co-expression network analysis was performed on two large sets of mRNA-seq to identify co-expression modules. Of these modules, two containing either CYP11A1 or HSD17B3 were further analyzed. This comprehensive correlation meta-analysis identified a group of 85 genes with CYP11A1 as hub gene, but did not allow the characterization of a robust correlation network around HSD17B3. As the CYP11A1-group includes most of the genes involved in steroid synthesis pathways (including LHCGR encoding for the LH receptor), it may control the synthesis of most of the testicular steroids. The independent expression of HSD17B3 probably allows part of the production of testosterone to escape this control. This CYP11A1-group contained also INSL3 and AGT genes encoding a peptide hormone and an angiotensin peptide precursor, respectively. View Full-Text
Keywords: porcine testis; co-expression network; steroids synthesis; WGCNA; testosterone; estrogens; androstenone; CYP11A1; HSD17B3; AKR1C porcine testis; co-expression network; steroids synthesis; WGCNA; testosterone; estrogens; androstenone; CYP11A1; HSD17B3; AKR1C
►▼ Show Figures 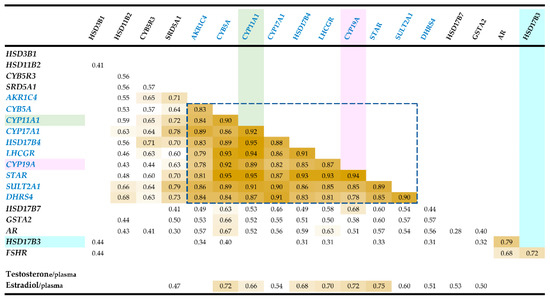