In domesticated strains of the Nile tilapia, phenotypic sex has been linked to genetic variants on linkage groups 1, 20 and 23. This diversity of sex-loci might reflect a naturally polymorphic sex determination system in Nile tilapia, or it might be an artefact arising from the process of domestication. Here, we searched for sex-determiners in wild populations from Kpandu, Lake Volta (Ghana-West Africa), and from Lake Koka (Ethiopia-East Africa) that have not been subjected to any genetic manipulation. We analysed lab-reared families using double-digest Restriction Associated DNA sequencing (ddRAD) and analysed wild-caught males and females with pooled whole-genome sequencing (WGS). Strong sex-linked signals were found on LG23 in both populations, and sex-linked signals with LG3 were observed in Kpandu samples. WGS uncovered blocks of high sequence coverage, suggesting the presence of B chromosomes. We confirmed the existence of a tandem amh duplication in LG23 in both populations and determined its breakpoints between the oaz1 and dot1l genes. We found two common deletions of ~5 kb in males and confirmed the presence of both amhY and amh∆Y genes. Males from Lake Koka lack both the previously reported 234 bp deletion and the 5 bp frameshift-insertion that creates a premature stop codon in amh∆Y. View Full-Text
Keywords: sex-determinant; Y-chromosome; amh; male duplication; Nile tilapia sex-determinant; Y-chromosome; amh; male duplication; Nile tilapia
►▼ Show Figures 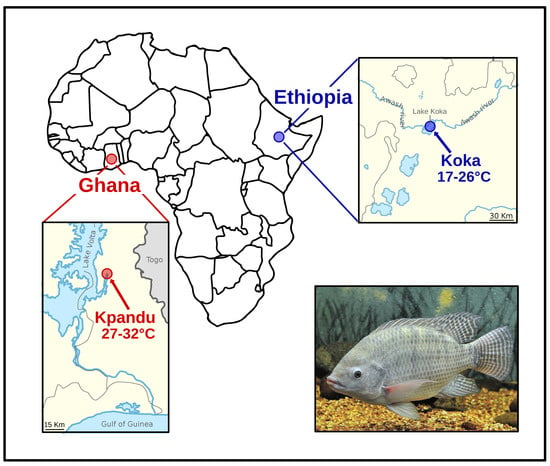