Interferon regulatory factor 7 (IRF7) is known as the master transcription factor of the type I interferon response in mammalian species along with IRF3. Yet birds only have IRF7, while they are missing IRF3, with a smaller repertoire of immune-related genes, which leads to a distinctive immune response in chickens compared to in mammals. In order to understand the functional role of IRF7 in the regulation of the antiviral response against avian influenza virus in chickens, we generated IRF7-/- chicken embryonic fibroblast (DF-1) cell lines and respective controls (IRF7wt) by utilizing the CRISPR/Cas9 (clustered regularly interspaced short palindromic repeats/CRISPR-associated protein 9) system. IRF7 knockout resulted in increased viral titers of low pathogenic avian influenza viruses. Further RNA-sequencing performed on H6N2-infected IRF7-/- and IRF7wt cell lines revealed that the deletion of IRF7 resulted in the significant down-regulation of antiviral effectors and the differential expression of genes in the MAPK (mitogen-activated protein kinase) and mTOR (mechanistic target of rapamycin) signaling pathways. Dynamic gene expression profiling of the host response between the wildtype and IRF7 knockout revealed potential signaling pathways involving AP1 (activator protein 1), NF-κB (nuclear factor kappa B) and inflammatory cytokines that may complement chicken IRF7. Our findings in this study provide novel insights that have not been reported previously, and lay a solid foundation for enhancing our understanding of the host antiviral response against the avian influenza virus in chickens. View Full-Text
Keywords: avian influenza virus; chicken; CRISPR/Cas9; interferon; IRF7; knockout; RNA-seq avian influenza virus; chicken; CRISPR/Cas9; interferon; IRF7; knockout; RNA-seq
►▼ Show Figures 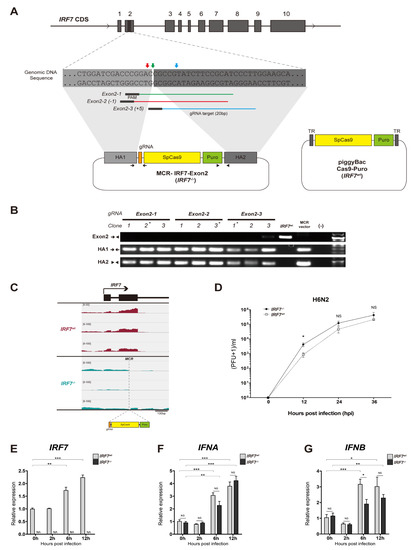