Recent Advances in the Pathophysiology of Musculocontractural Ehlers-Danlos Syndrome

Porcine epidemic diarrhea (PED) is a major gastrointestinal disease afflicting suckling pigs that causes huge industrial economic losses. In this study, we investigated microbiota from the colonic mucosa and content in healthy and PED piglets. High-throughput 16S rRNA gene sequencing was performed to identify inter-group differences. Firmicutes, Fusobacteria, Proteobacteria, and Bacteroidetes were the top four affected phyla. The proportion of Proteobacteria was higher in infected than in healthy piglets, and the opposite was observed for Bacteroidetes (more than four-fold higher in the healthy group). In the infected group, Fusobacterium accounted for 36.56% and 21.61% in the colonic mucosa and contents, respectively, while in the healthy group, they comprised 22.53% and 12.67%, respectively. The percentage of Lactobacillus in healthy colons (15.63%) was considerably higher than that in the disease group (<10%). In both the colonic mucosa and contents, functional enrichment differed significantly between healthy and diseased groups. Overall, infection with the PED virus increased the proportion of harmful bacteria and decreased the proportion of beneficial bacteria in the colons of piglets. Targeting intestinal microbiota could be a promising method for PED prevention, thus opening new avenues for future research. View Full-Text
Keywords: colonic microbiota; porcine epidemic diarrhea virus; 16S rRNA gene; colonic mucosa; suckling pigs colonic microbiota; porcine epidemic diarrhea virus; 16S rRNA gene; colonic mucosa; suckling pigs
►▼ Show Figures 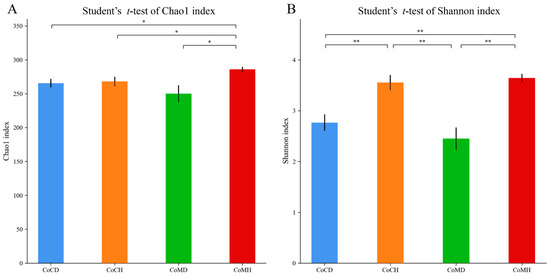