Kinase-Independent Functions of MASTL in Cancer: A New Perspective on MASTL Targeting

Microtubule-associated serine/threonine kinase-like (MASTL; Greatwall) is a well-characterized kinase, whose catalytic role has been extensively studied in relation to cell-cycle acceleration. Importantly, MASTL has been implicated to play a substantial role in cancer progression and subsequent studies have shown that MASTL is a significant regulator of the cellular actomyosin cytoskeleton. Several kinases have non-catalytic properties, which are essential or even sufficient for their functions. Likewise, MASTL functions have been attributed both to kinase-dependent phosphorylation of downstream substrates, but also to kinase-independent regulation of the actomyosin contractile machinery. In this review, we aimed to highlight the catalytic and non-catalytic roles of MASTL in proliferation, migration, and invasion. Further, we discussed the implications of this dual role for therapeutic design. View Full-Text
Keywords: MASTL; actin; contractility; cell cycle; cancer; therapeutic targeting; kinase inhibitor MASTL; actin; contractility; cell cycle; cancer; therapeutic targeting; kinase inhibitor
►▼ Show Figures 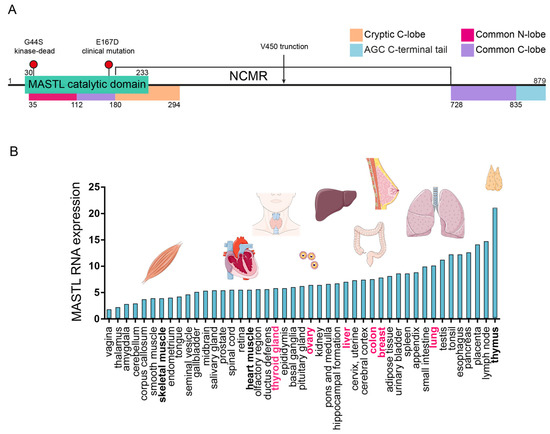