YRNAs are a class of non-coding RNAs that are components of the Ro60 ribonucleoprotein particle and are essential for initiation of DNA replication. Ro60 ribonucleoprotein particle is a target of autoimmune antibodies in patients suffering from systemic lupus erythematosus and Sjögren’s syndrome. Deregulation of YRNAs has been confirmed in many cancer types, but not in head and neck squamous cell carcinoma (HNSCC). The main aim of this study was to determine the biological role of YRNAs in HNSCC, the expression of YRNAs, and their usefulness as potential HNSCC biomarkers. Using quantitative reverse transcriptase (qRT)-PCR, the expression of YRNAs was measured in HNSCC cell lines, 20 matched cancer tissues, and 70 FFPETs (Formaline-Fixed Paraffin-Embedded Tissue) from HNSCC patients. Using TCGA (The Cancer Genome Atlas) data, an analysis of the expression levels of selected genes, and clinical-pathological parameters was performed. The expression of low and high YRNA1 expressed groups were analysed using gene set enrichment analysis (GSEA). YRNA1 and YRNA5 are significantly downregulated in HNSCC cell lines. YRNA1 was found to be significantly downregulated in patients’ tumour sample. YRNAs were significantly upregulated in T4 stage. YRNA1 showed the highest sensitivity, allowing to distinguish healthy from cancer tissue. An analysis of TCGA data revealed that expression of YRNA1 was significantly altered in the human papilloma virus (HPV) infection status. Patients with medium or high expression of YRNA1 showed better survival outcomes. It was noted that genes correlated with YRNA1 were associated with various processes occurring during cancerogenesis. The GSEA analysis showed high expression enrichment in eight vital processes for cancer development. YRNA1 influence patients’ survival and could be used as an HNSCC biomarker. YRNA1 seems to be a good potential biomarker for HNSCC, however, more studies must be performed and these observations should be verified using an in vitro model. View Full-Text
Keywords: YRNA; RNY; small non-coding RNA; Ro60 associated YRNA; HNSCC; biomarker; GSEA; cancer YRNA; RNY; small non-coding RNA; Ro60 associated YRNA; HNSCC; biomarker; GSEA; cancer
►▼ Show Figures 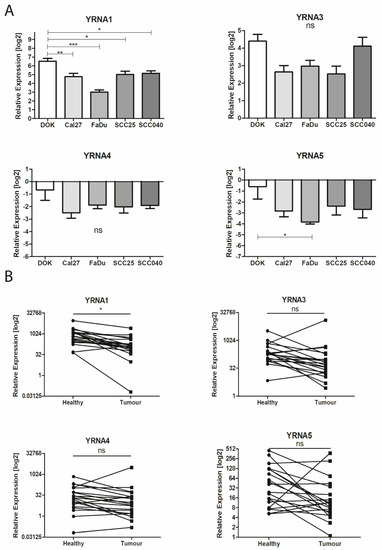