Although the influenza A virus H7N9 subtype circulates within several avian species, it can also infect humans with a severe disease outcome. To better understand the biology of the H7N9 virus we examined the host response to infection in avian and human cells. In this study we used the A/Anhui/1/2013 strain, which was isolated during the first wave of the H7N9 epidemic. The H7N9 virus-infected both human (Airway Epithelial cells) and avian (Chick Embryo Fibroblast) cells, and each infected host transcriptome was examined with bioinformatic tools and compared with other representative avian and human influenza A virus subtypes. The H7N9 virus induced higher expression changes (differentially regulated genes) in both cell lines, with more prominent changes observed in avian cells. Ortholog mapping of differentially expression genes identified significant enriched common and cell-type pathways during H7N9 infections. This data confirmed our previous findings that different influenza A virus subtypes have virus-specific replication characteristics and anti-virus signaling in human and avian cells. In addition, we reported for the first time, the new HIPPO signaling pathway in avian cells, which we hypothesized to play a vital role to maintain the antiviral state of H7N9 virus-infected avian cells. This could explain the absence of disease symptoms in avian species that tested positive for the presence of H7N9 virus. View Full-Text
Keywords: Influenza A virus; H7N9; A549 cells; CEF cells; differentially expression genes (DEGs); HIPPO signaling pathway Influenza A virus; H7N9; A549 cells; CEF cells; differentially expression genes (DEGs); HIPPO signaling pathway
►▼ Show Figures 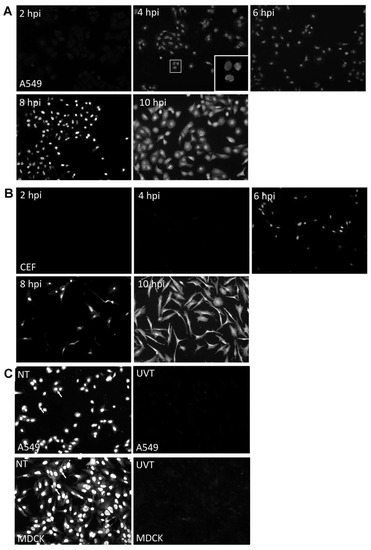