7-Ketocholesterol (7-KC) is a cholesterol oxidation product with several biological functions. 7-KC has the capacity to cause cell death depending on the concentration and specific cell type. Mesenchymal stem cells (MSCs) are multipotent cells with the ability to differentiate into various types of cells, such as osteoblasts and adipocytes, among others. MSCs contribute to the development of a suitable niche for hematopoietic stem cells, and are involved in the development of diseases, such as leukemia, to a yet unknown extent. Here, we describe the effect of 7-KC on the death of bone marrow MSCs from patients with acute myeloid leukemia (LMSCs). LMSCs were less susceptible to the death-promoting effect of 7-KC than other cell types. 7-KC exposure triggered the extrinsic pathway of apoptosis with an increase in activated caspase-8 and caspase-3 activity. Mechanisms other than caspase-dependent pathways were involved. 7-KC increased ROS generation by LMSCs, which was related to decreased cell viability. 7-KC also led to disruption of the cytoskeleton of LMSCs, increased the number of cells in S phase, and decreased the number of cells in the G1/S transition. Autophagosome accumulation was also observed. 7-KC downregulated the SHh protein in LMSCs but did not change the expression of SMO. In conclusion, oxiapoptophagy (OXIdative stress + APOPTOsis + autophagy) seems to be activated by 7-KC in LMSCs. More studies are needed to better understand the role of 7-KC in the death of LMSCs and the possible effects on the SHh pathway. View Full-Text
Keywords: oxysterol; 7-KC; mesenchymal stem cell; apoptosis; autophagy; acute myeloid leukemia; bone marrow oxysterol; 7-KC; mesenchymal stem cell; apoptosis; autophagy; acute myeloid leukemia; bone marrow
►▼ Show Figures 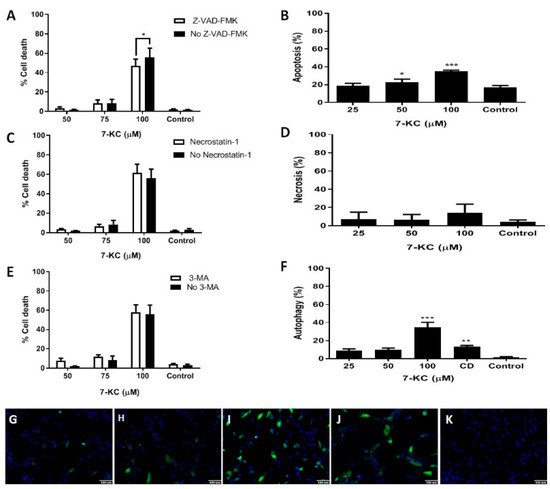