Background: FGFR inhibition has been proposed as treatment for dedifferentiated liposarcoma (DDLPS) with amplified FRS2, but we previously only demonstrated transient cytostatic effects when treating FRS2-amplified DDLPS cells with NVP-BGJ398. Methods: Effects of the more potent FGFR inhibitor LY2874455 were investigated in three DDLPS cell lines by measuring effects on cell growth and apoptosis in vitro and also testing efficacy in vivo. Genome, transcriptome and protein analyses were performed to characterize the signaling components in the FGFR pathway. Results: LY2874455 induced a stronger, longer-lasting growth inhibitory effect and moderate level of apoptosis for two cell lines. The third cell line, did not respond to FGFR inhibition, suggesting that FRS2 amplification alone is not sufficient to predict response. Importantly, efficacy of LY2874455 was confirmed in vivo, using an independent FRS2-amplified DDLPS xenograft model. Expression of FRS2 was similar in the responding and non-responding cell lines and we could not find any major difference in downstream FGFR signaling. The only FGF expressed by unstimulated non-responding cells was the intracellular ligand FGF11, whereas the responding cell lines expressed extracellular ligand FGF2. Conclusion: Our study supports LY2874455 as a better therapy than NVP-BGJ398 for FRS2-amplified liposarcoma, and a clinical trial is warranted. View Full-Text
Keywords: FRS2; FGFR; NVP-BGJ398; LY2874455; sarcoma FRS2; FGFR; NVP-BGJ398; LY2874455; sarcoma
►▼ Show Figures 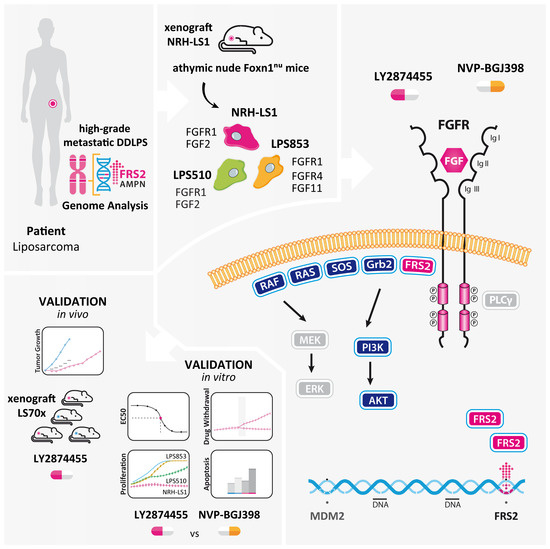