Blood Cell In Vitro Cytokine Production in Response to Lipopolysaccharide Stimulation in a Healthy Population: Effects of Age, Sex, and Smoking
Previous Article in Journal

Epithelial and Neural Cadherin in Mammalian Fertilization: Studies in the Mouse Model

Successful mammalian fertilization requires a well-orchestrated sequence of molecular events leading to gamete fusion. Since this interaction involves Ca2+-dependent adhesion events, the participation of the Ca+2-dependent cell-cell adhesion proteins Epithelial (E-cad) and Neural (N-cad) cadherin is envisaged. We have previously reported the expression of E-cad and N-cad in human gametes and showed evidence of their involvement in sperm-oocyte adhesion events leading to fertilization. To overcome ethical limitations associated with the use of human gametes in fertilization-related studies, the mouse has been selected worldwide as the experimental model for over 4 decades. Herein, we report a detailed study aimed at characterizing the expression of E-cad and N-cad in murine gametes and their involvement in murine fertilization using specific antibodies and blocking peptides towards both adhesion proteins. E-cad and N-cad protein forms, as well as other members of the adhesion complex, specifically β-catenin and actin, were identified in spermatozoa, cumulus cells and oocytes protein extracts by means of Western immunoblotting. In addition, subcellular localization of these proteins was determined in whole cells using optical fluorescent microscopy. Gamete pre-incubation with anti-E-cad (ECCD-1) or N-cad (H-63) antibodies resulted in decreased (p < 0.05) In Vitro Fertilization (IVF) rates, when using both cumulus-oocytes complexes and cumulus-free oocytes. Moreover, IVF assays done with denuded oocytes and either antibodies or blocking peptides against E-cad and N-cad led to lower (p < 0.05) fertilization rates. When assessing each step, penetration of the cumulus mass was lower (p < 0.05) when spermatozoa were pre-incubated with ECCD-1 or blocking peptides towards E-cad or towards both E- and N-cad. Moreover, sperm-oolemma binding was impaired (p < 0.0005) after sperm pre-incubation with E-cad antibody or blocking peptide towards E-cad, N-cad or both proteins. Finally, sperm-oocyte fusion was lower (p < 0.05) after sperm pre-incubation with either antibody or blocking peptide against E-cad or N-cad. Our studies demonstrate the expression of members of the adherent complex in the murine model, and the use of antibodies and specific peptides revealed E-cad and N-cad participation in mammalian fertilization. View Full-Text
Keywords: epithelial cadherin; neural cadherin; in vitro fertilization; spermatozoa; oocyte epithelial cadherin; neural cadherin; in vitro fertilization; spermatozoa; oocyte
►▼ Show Figures 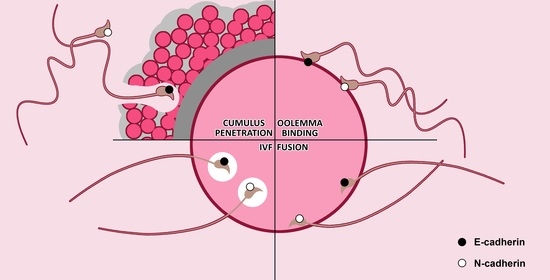