Vermicompost is the product of composting or breaking down organic matter through the use of earthworms. It is rich in essential plant nutrients, and has the ability to enhance the condition and increase the quality of the soil. In the present study, a field trial was conducted from January 2015 until March 2016 to elucidate the effects of vermicompost application (compared to supplementation with chemical fertilizer and no fertilizer) on the sandy loam soil and plant nutrients of pineapple (Ananas comosus var. MD2). The morphophysiology and yield performance of MD2 pineapple grown with vermicompost in the field were also evaluated. In this study, vermicompost was applied onto the sandy loam soils during transplanting, followed by a second application at seven MAP (months after planting) at the rate of 10 t ha−1. On the other hand, the chemical fertilizer was applied based on the normal conventional cultivation practice. The soil and D-leaf samples at six MAP (S1) and during the red bud stage (S2; 10 MAP) were used to determine the soil and plant nutrient contents. The morphology of the plants was evaluated every month, and the fruits that were produced were subjected to quality analysis. Data analysis revealed that soil pH was increased after a second supplementation of vermicompost and contained significantly higher total N (0.15%) in the soils compared to the control (0.07%). There was no significant difference between plants supplied with chemical fertilizer and vermicompost in terms of plant height, number of leaves, or the length and width of D-leaves. However, different fertilization treatments were found to affect the yield and physical characteristics of the resulting fruits. Plants supplied with chemical fertilizer produced the highest fruit yield (136.97 t ha−1) with the largest fruit size, followed by vermicompost (121.39 t ha−1) and the control (94.93 t ha−1). However, fruits supplied with vermicompost were observed to have the smallest crowns. Taken together, these results indicated that the use of vermicompost produced pineapple plants with excellent growth performance, comparable to that obtained when chemical fertilizer was used. Also, based on the cost analysis conducted, it was shown that the total cost (fertilizer and labor) for plants grown with vermicompost was lower than plants grown with chemical fertilizer. However, the usage of vermicompost as the single source of nutrients is not suggested for this type of soil and field conditions, but can be used as a supplement to maintain the soil quality and ensure agricultural sustainability. View Full-Text
Keywords: vermicompost; organic agriculture; nutrients; growth productivity; pineapple; MD2; D-leaf length; SPAD reading; physicochemical properties vermicompost; organic agriculture; nutrients; growth productivity; pineapple; MD2; D-leaf length; SPAD reading; physicochemical properties
►▼ Show Figures 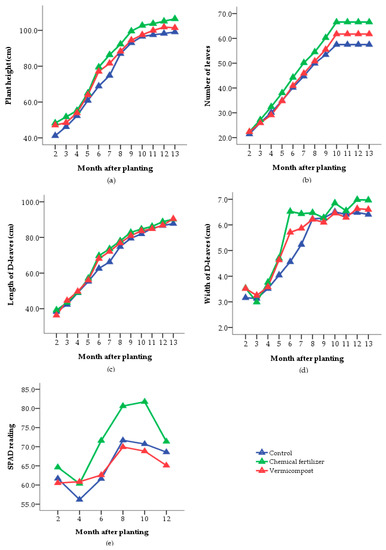