GmDNAJC7 from Soybean Is Involved in Plant Tolerance to Alkaline-Salt, Salt, and Drought Stresses
Previous Article in Special Issue

Nutritional Characteristics of the Seed Protein in 23 Mediterranean Legumes

The faba bean (Vicia faba) is a temperate grain legume, that is regaining interest due to the high demand for food and feed uses and the environmental services provided. The parasitic weed broomrape (Orobanche crenata) appears as the major constraint to agricultural production in the Mediterranean Basin. The yield stability can be managed by adjusting agronomic practices and breeding for adaptation. In this study, we compared the performance of three susceptible faba bean accessions with that of eight lines previously selected for their broomrape resistance, in multi-environment field trials. Results confirmed that the grain yield in the region was negatively affected, mainly by broomrape infection, followed at a distance by ascochyta blight (Ascochyta fabae), whereas the grain yield was little affected by the low occurring levels of chocolate spot infection (Botrytis fabae). The yield was favored by rain at flowering and was reduced by low temperatures at pre-flowering and flowering, and by high temperatures at flowering and grain-filling. The combined ANOVA showed significant effects of the genotype, environment, and genotypex environment interaction. The weighted average of the absolute scores biplot (WAASB), a heat map with 21 scenarios based on the WAASB ratio and the multi-trait stability index (MTSI) were utilized to determine the mean performance and stability of the faba bean genotypes. Quijote, Navio6, Baraca and FaraonSC are proposed as ideal lines for cultivation in the region and to be further used in future breeding programs. View Full-Text
Keywords: ascochyta blight; chocolate spot; genetic resistance; genotype × environment interactions; Orobanche crenata; MTSI; Vicia faba; WAASB ascochyta blight; chocolate spot; genetic resistance; genotype × environment interactions; Orobanche crenata; MTSI; Vicia faba; WAASB
►▼ Show Figures 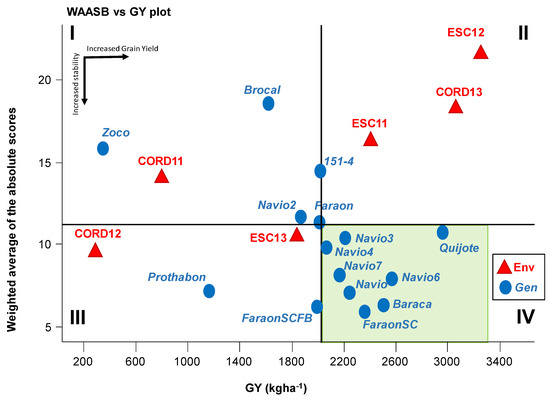