This study aims at assessing the accuracy of estimating daily reference evapotranspiration (ETo) computed with NASA POWER reanalysis products. Daily ETo estimated from local observations of weather variables in 14 weather stations distributed across Alentejo Region, Southern Portugal were compared with ETo derived from NASA POWER weather data, using raw and bias-corrected datasets. Three different methods were used to compute ETo: (a) FAO Penman-Monteith (PM); (b) Hargreaves-Samani (HS); and (c) MaxTET. Results show that, when using raw NASA POWER datasets, a good accuracy between the observed ETo and reanalysis ETo was observed in most locations (R2 > 0.70). PM shows a tendency to over-estimating ETo with an RMSE as high as 1.41 mm d−1, while using a temperature-based ET estimation method, an RMSE lower than 0.92 mm d−1 is obtained. If a local bias correction is adopted, the temperature-based methods show a small over or underestimation of ETo (–0.40 mm d−1 ≤ MBE < 0.40 mm d−1). As for PM, ETo is still underestimated for 13 locations (MBE < 0 mm d−1) but with an RMSE never higher than 0.77 mm d−1. When NASA POWER raw data is used to estimate ETo, HS_Rs proved the most accurate method, providing the lowest RMSE for half the locations. However, if a data regional bias correction is used, PM leads to the most accurate ETo estimation for half the locations; also, when a local bias correction is performed, PM proved the be the most accurate ETo estimation method for most locations. Nonetheless, MaxTET proved to be an accurate method; its simplicity may prove to be successful not only when only maximum temperature data is available but also due to the low data required for ETo estimation. View Full-Text
Keywords: reference evapotranspiration; NASA POWER; reanalysis dataset; hot summer Mediterranean climate; bias correction reference evapotranspiration; NASA POWER; reanalysis dataset; hot summer Mediterranean climate; bias correction
►▼ Show Figures 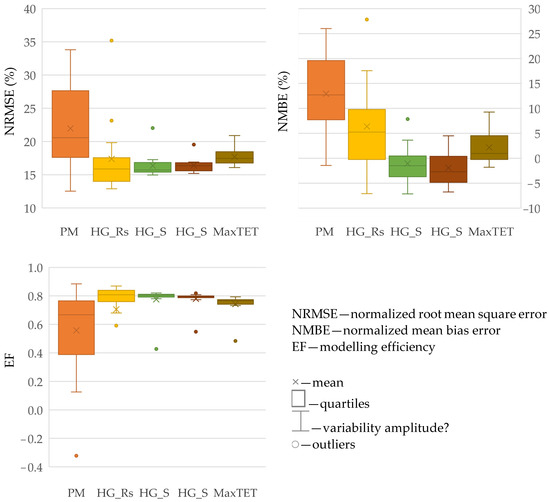