The use of spent mushroom substrate (SMS) in new cultivation cycles has already been reported due to its economic and environmental viability. When considering the application of the circular economy concept in the production of edible mushrooms, the re-use of the SMS within the same process is highly attractive, because it allows a better use of the biomass and the energy involved in the process and, therefore, tends to improve energy efficiency and resource conservation. However, this alternative generates important challenges, which derive from maintaining the quality standards of the mushrooms produced and, at the same time, not incurring excessive costs that are detrimental to the process itself. In our opinion, the main difficulty of the process in achieving success is regarding the biological and agronomic parameters that involve the production of the mushroom. It is useless to apply SMS in new cycles if the mushroom harvest is impaired and farms become non-viable. However, numerous examples are reported here where SMS was recycled into new substrates for either the same or different mushroom species without negatively affecting yield compared with using substrates prepared from 100% fresh raw materials. Thus, we suggest that each farm has its own specific technological study, since a small variation in the raw material of the compost, and mushroom cultivation practices and casing layer used, can influence the entire viability of the mushroom circular economy. View Full-Text
Keywords: efficiency process; waste reduction; compost production; casing layer; yield efficiency process; waste reduction; compost production; casing layer; yield
►▼ Show Figures 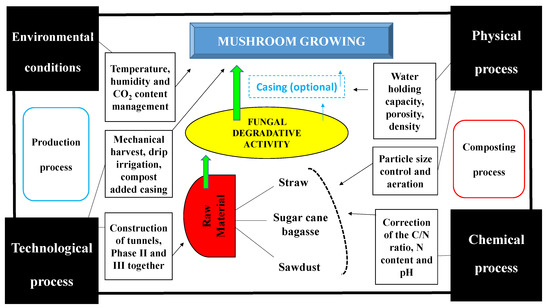