Yields, Calorific Value and Chemical Properties of Cup Plant Silphium perfoliatum L. Biomass, Depending on the Method of Establishing the Plantation
Previous Article in Special Issue

NPK fertilizer briquettes (NPKBriq) and organically enhanced N fertilizer (OENF), as newly developed fertilizer products, are reported to increase maize (Zea mays L.) yield and N use efficiency, but their effects on maize grain composition are unknown. The objective of this study was to determine the effects of NPKBriq and OENF on the protein, oil, fiber, ash, and starch of maize grain. A field study was conducted at Jackson and Grand Junction, TN, during 2012 and 2013, with NPKBriq, OENF, ammonium sulfate ((NH4)2SO4) (+P and K), and urea (+P and K) as the main treatments and 0, 85, 128, and 170 kg N ha−1 as the sub treatments under a randomized complete block split plot design with four replicates. The fiber concentration was more responsive to the fertilizer source than the protein, oil, ash, and starch concentrations. OENF resulted in a higher fiber concentration than NPKBriq at 85 kg N ha−1 in 2013, averaged over the two sites. Both OENF and NPKBriq had nearly no significant effects on the concentrations of the quality attributes compared with ammonium sulfate and urea. In conclusion, the nutrient-balanced NPKBriq exerts the same or greater effects on maize grain quality relative to the commonly used nutrient management practices of urea (+P and K) and ammonium sulfate (+P and K) under normal weather conditions. OENF is an alternate N source to urea and ammonium sulfate for similar to higher maize grain quality. View Full-Text
Keywords: protein; oil; fiber; ash; starch; NPK briquette; organically enhanced N fertilizer; nitrogen; Zea mays L. protein; oil; fiber; ash; starch; NPK briquette; organically enhanced N fertilizer; nitrogen; Zea mays L.
►▼ Show Figures 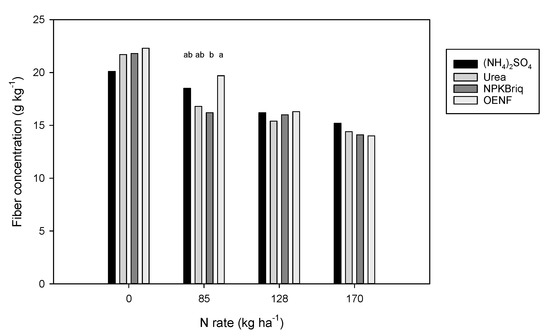