Assessment of Multi-Date Sentinel-1 Polarizations and GLCM Texture Features Capacity for Onion and Sunflower Classification in an Irrigated Valley: An Object Level Approach
Next Article in Special Issue

Weed Management in the Transition to Conservation Agriculture: Farmers’ Response

Recently adopted in France, conservation agriculture still faces some challenges to its adoption, particularly weed management. To highlight the weed management practices used by farmers in conservation agriculture and the changes induced by its adoption, a large sample of 425 French farmers were invited to complete an online survey. Weed management practices used by farmers were requested for three periods: before adoption, during the first years of conservation agriculture (one to two years after adoption), and when the agricultural system is considered “mastered” by the farmer. The use of each farming practice was firstly studied independently for each period. Then, a multiple correspondence analysis followed by a hierarchical ascendant classification resulted in groups of farmers with different combinations of practices for each period. Finally, the groups of farmers were followed through the periods. Results showed that changes in weed management done according to farmers when adopting and mastering conservation agriculture are multiple and vary according to farmers and their previous weed management. Although some similar choices were identified, some farmers’ trajectories, especially those with a prior combination driven by either a soil disturbance strategy or a crop competitiveness strategy, are difficult to identify when adopting conservation agriculture. Upon mastering the agricultural system, farmers’ choices become more apparent. View Full-Text
Keywords: online survey; adoption phase; farming practices; no-tillage; cover crop online survey; adoption phase; farming practices; no-tillage; cover crop
►▼ Show Figures 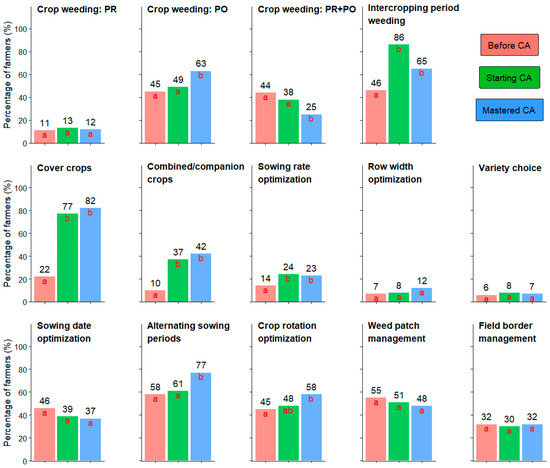