Alfalfa and its rhizobial symbiont are sensitive to salinity. We compared the physiological responses of alfalfa populations inoculated with a salt-tolerant rhizobium strain, exposed to five NaCl concentrations (0, 20, 40, 80, or 160 mM NaCl). Two initial cultivars, Halo (H-TS0) and Bridgeview (B-TS0), and two populations obtained after three cycles of recurrent selection for salt tolerance (H-TS3 and B-TS3) were compared. Biomass, relative water content, carbohydrates, and amino acids concentrations in leaves and nodules were measured. The higher yield of TS3-populations than initial cultivars under salt stress showed the effectiveness of our selection method to improve salinity tolerance. Higher relative root water content in TS3 populations suggests that root osmotic adjustment is one of the mechanisms of salt tolerance. Higher concentrations of sucrose, pinitol, and amino acid in leaves and nodules under salt stress contributed to the osmotic adjustment in alfalfa. Cultivars differed in their response to recurrent selection: under a 160 mM NaCl-stress, aromatic amino acids and branched-chain amino acids (BCAAs) increased in nodules of B-ST3 as compared with B-TS0, while these accumulations were not observed in H-TS3. BCAAs are known to control bacteroid development and their accumulation under severe stress could have contributed to the high nodulation of B-TS3. View Full-Text
Keywords: salinity tolerance; Medicago sativa L.; rhizobium; nodules; amino acids; pinitol; sucrose salinity tolerance; Medicago sativa L.; rhizobium; nodules; amino acids; pinitol; sucrose
►▼ Show Figures 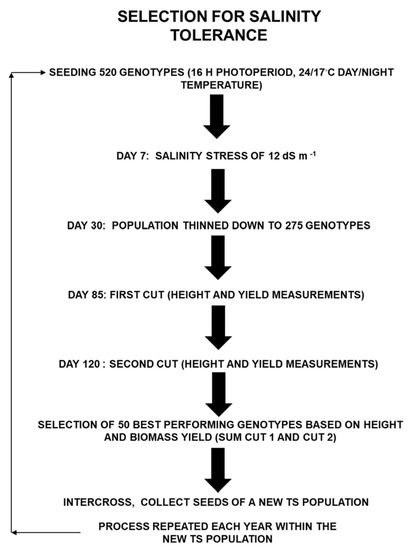