Growth of Cucumber Scions, Rootstocks, and Grafted Seedlings as Affected by Different Irrigation Regimes during Cultivation of ‘Joenbaekdadagi’ and ‘Heukjong’ Seedlings in a Plant Factory with Artificial Lighting
Previous Article in Special Issue

Soil organic matter (SOM) is a combination of materials having different origin and with different stabilization and decomposition processes. To determine the different SOM pools and their turnover rates, a silt loam-textured Luvisol from West Hungary was taken from the 0–20 cm soil depth and incubated for 163 days. Maize residues were added to the soil in order to obtain natural 13C enrichment. Four different SOM fractions—particulate organic matter (POM), sand and stable aggregate (S + A), silt- plus clay-sized (s + c) and chemically resistant soil organic carbon (rSOC) fractions—were separated and analyzed using FT-IR, δ13C, and 14C measurements. The mean residence time (MRT) of the new C and the proportion of maize-derived C in the fractions were calculated. The POM fraction was found to be the most labile C pool, as shown by the easily decomposable chemical structures (e.g., aliphatic, O-alkyl, and polysaccharides), the highest proportion (11.7 ± 2.5%) of maize-derived C, and an MRT of 3.6 years. The results revealed that the most stable fraction was the rSOC fraction which had the smallest proportion of maize-derived C (0.18 ± 2.5%) and the highest MRT (250 years), while it was the only fraction with a negative value of Δ14C (−75.0 ± 2.4‰). Overall, the study confirmed the hypothesis that the SOM associated with finer-sized soil particles decomposes the least, highlighting the significance of the fractionation process for more accurate determination of the decomposition processes of SOM pools. View Full-Text
Keywords: carbon stabilization; 13C labeling; fractionation; FT-IR spectroscopy; radiocarbon carbon stabilization; 13C labeling; fractionation; FT-IR spectroscopy; radiocarbon
►▼ Show Figures 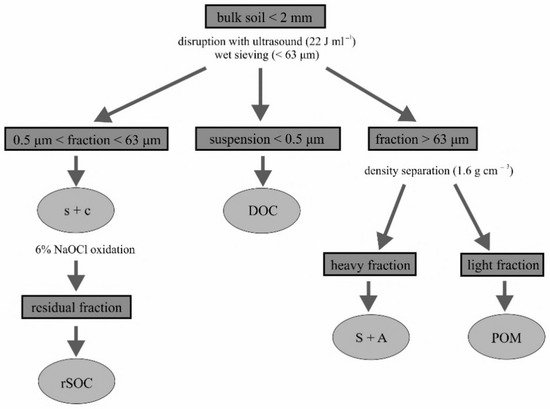