The aim of this two-year study was to determine whether the contents of macronutrients and macro and microelements in wheat grain can be increased by crossbreeding Triticum aestivum and T. spelta. The experimental material comprised the grains of F6 and F7 hybrids and their parental forms. The element content of grain was determined by ICP-SFMS. Hybrid grains had significantly higher ash contents than bread wheat grain (1.90% and 1.93% versus 1.62%). Crude protein content was lowest in bread wheat grain (11.75%) and highest in spelt grain (14.67%). Hybrid grains had significantly higher protein contents (12.97% and13.19%) than bread wheat grain. In both years of the study, the concentrations of P, S, Mg and Ca were highest in spelt grain, whereas their content in hybrids was lower than in spelt grain, but higher than in bread wheat grain. The concentrations of desirable microelements were highest in spelt grain, and the micronutrient profile of hybrid grains was more similar to bread wheat than spelt. Therefore, the hybrids can constitute promising source material for quality breeding in wheat. View Full-Text
Keywords: hybrids; wheat; spelt; macronutrients; macro and microelements hybrids; wheat; spelt; macronutrients; macro and microelements
►▼ Show Figures 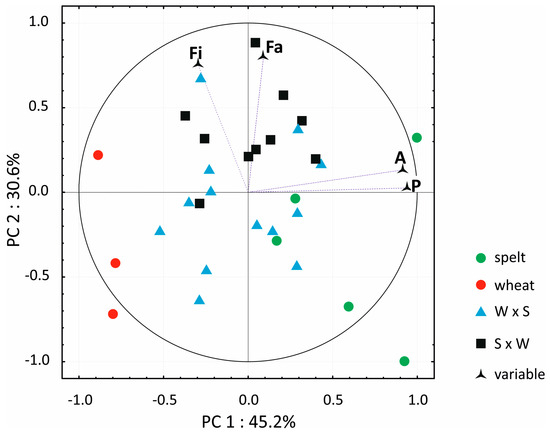