The aim of this field experiment was to analyze the influence of different nitrogen and sulfur doses on yield as well as the content and uptake of iron (Fe), manganese (Mn), copper (Cu) and zinc (Zn) by spring rye grain. The study was conducted in south-eastern Poland (2009–2011) on Cambisols (WRB 2015), in conditions of low sulfur content in soil. The experiment included four doses of N fertilization (0, 30, 60 and 90 kg ha−1) and two doses of S supplementation (0 and 40 kg ha−1). The analysis showed that fertilization with N and S had a positive effect on the studied features of spring rye. The highest grain yields were found after use of 90 kg N ha−1. The grain of rye fertilized with these doses of N was characterized by the highest concentration and uptake of tested microelements. The supplementation of sulfur in a dose of 40 kg S ha−1 improved the nitrogen effect, because the rye grain yield and the content and uptake of micronutrients (except Mn) by rye grain dry mass increased. The highest yield of spring rye grain and accumulation of Mn and Zn and intake of Mn, Zn and Cu by grain dry mass (DM) were obtained in the vegetation season of 2011, which was characterized by an optimal rainfall distribution. The highest accumulation of Fe and Cu and intake of Fe were obtained in the vegetation season of 2009. Significant correlations were found also between grain yield and the content and uptake of all studied micronutrients. The supplementation of NPK fertilization with sulfur can be a good means of agronomic biofortification for spring rye in order to increase the content and uptake of Fe, Mn, Zn and Cu. View Full-Text
Keywords: agronomic biofortification; micronutrients; nitrogen; sulfur; spring rye agronomic biofortification; micronutrients; nitrogen; sulfur; spring rye
►▼ Show Figures 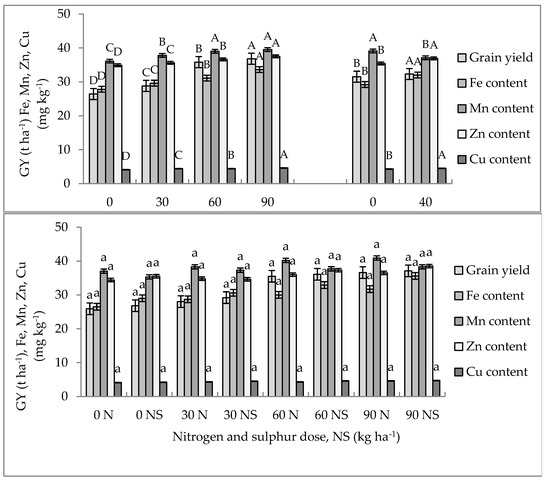