Regenerated Cellulose Products for Agricultural and Their Potential: A Review
Previous Article in Special Issue

Experimental Investigation of the Wear Behaviour of Coated Polymer Gears

A comprehensive experimental investigation of the wear behaviour of coated spur polymer gears made of POM is performed in this study. The three physical vapour deposition (PVD) coatings investigated were aluminium (Al), chromium (Cr), and chromium nitrite (CrN). Al was deposited in three process steps: By plasma activation, metallisation of Al by the magnetron sputtering process, and by plasma polymerisation. Cr deposition was performed in only one step, namely, the metallization of Cr by the magnetron sputtering process. The deposition of CrN was carried out in two steps: the first involved the metallization of Cr by the magnetron sputtering process while the second step, vapour deposition, involved the reactive metallisation of Cr with nitrogen, also by the magnetron sputtering process. The gears were tested on an in-house developed testing rig for different torques (16, 20, 24 and 30 Nm) and rotational speed of 1000 rpm. The duration of the experiments was set to 13 h, when the tooth thickness, and, consequently, the wear of the tooth flank was recorded. The experimental results showed that the influence of metallisation with aluminium, chromium, and chromium nitrite surface coatings on the wear behaviour of the analysed polymer gear is not significant. This is probably due to the fact that the analysed coatings were, in all cases, very thin (less than 500 nm), and therefore did not influence the wear resistance significantly. In that respect, an additional testing using thicker coatings should be applied in the further research work. View Full-Text
Keywords: polymer gears; coatings; experimental testing; wear polymer gears; coatings; experimental testing; wear
►▼ Show Figures 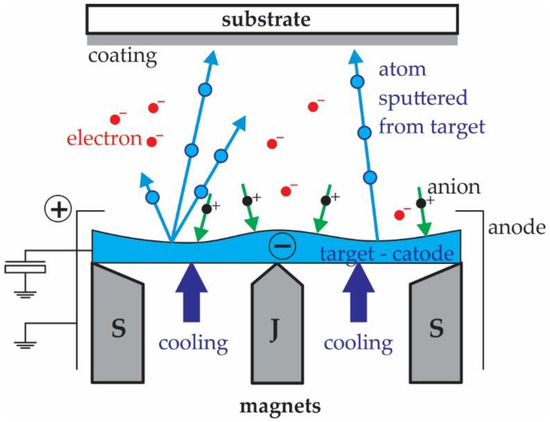