Fluorinated (F6) and zwitterionic, as well as phosphorylcholine (MPC) and sulfobetaine (MSA), copolymers containing a low amount (1 and 5 mol%) of 3-(trimethoxysilyl)propyl methacrylate (PTMSi) were prepared and covalently grafted to glass slides by using the trimethoxysilyl groups as anchorage points. Glass-surface functionalization and polymer-film stability upon immersion in water were proven by contact angle and angle-resolved X-ray photoelectron spectroscopy (AR-XPS) measurements. Antifouling performance of the grafted films was assayed against the yeast Candida albicans, the most common Candida species, which causes over 80% of candidiasis. Results revealed that the F6 fluorinated, hydrophobic copolymers performed much better in reducing the adhesion of C. albicans, with respect to both corresponding zwitterionic, hydrophilic MPC and MSA counterparts, and were similar to the glass negative control, which is well-known to inhibit the adhesion of C. albicans. A composition-dependent activity was also found, with the films of copolymer with 99 mol% F6 fluorinated co-units performing best.
Keywords: Candida albicans; zwitterionic polymer; fluorinated polymer; biofouling; antifouling; adhesion Candida albicans; zwitterionic polymer; fluorinated polymer; biofouling; antifouling; adhesion
►▼ Show Figures 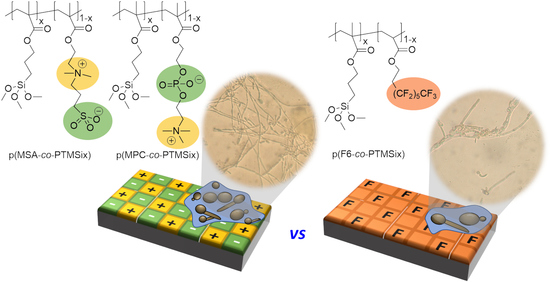