Thermophoresis: The Case of Streptavidin and Biotin

Synthesis of Polyaniline in Seawater

To date, polyaniline (PANI) has been synthesized in pure water. Aside from this, the application of PANI as a conducting polymer could be extended if it can be effectively synthesized in seawater, which constitutes 70% of the surface of the Earth. The production of functional plastics using natural resources without any additional purification would improve industrial production and enhance the comfort associated with our daily life. However, no examples of the effective application of seawater to PANI synthesis have been reported. Herein, PANI with an electrical conductivity of ~10−2 S/cm was synthesized in seawater as the reaction solvent. The electron spin resonance measurements confirmed the role of the polarons of PANI as charge carriers. In addition, a PANI/silk composite was prepared in seawater to produce a conducting cloth for further applications. The performance of the PANI prepared in seawater as the solvent was comparable to that of the PANI prepared in pure water. Thus, the proposed method allowed for the production of the conducting polymer via a convenient and low-cost method. This is the first study to report the usage of seawater as an abundant natural resource for synthesizing conducting polymers, promoting their wide application.
Keywords: polyaniline; conducting polymer; seawater polyaniline; conducting polymer; seawater
►▼ Show Figures 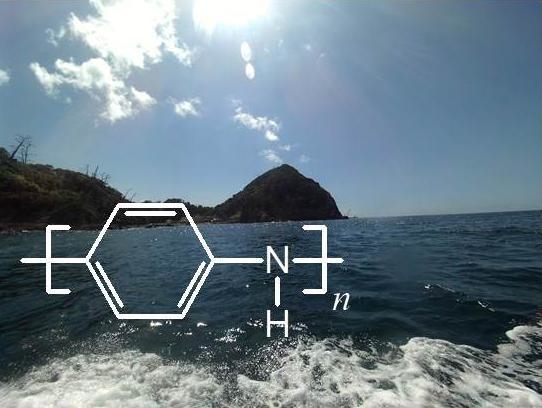