This work focused on the evaluation of the kinetics of dyeing polyester fabrics with high molecular weight disperse dyes, at low temperature by solvent microemulsion. This study also compared the effect of two non-toxic agro-sourced auxiliaries (o-vanillin and coumarin) using a non-toxic organic solvent. A dyeing bath consisting of a micro-emulsion system involving a small proportion of n-butyl acetate was used, and the kinetics of dyeing were analysed at four temperatures (83, 90, 95 and 100 °C). Moreover, the dyeing rate constants, correlation coefficient and activation energies were proposed for this system. It was found that o-vanillin yielded higher dye absorption levels than coumarin, leading to exhaustions of 88% and 87% for Disperse Red 167 and Disperse Blue 79, respectively. K/S values of dyed polyester were also found to be higher for dye baths containing o-vanillin with respect to the ones with coumarin. In terms of hot pressing fastness and wash fastness, generally no adverse influence on fastness properties was reported, while o-vanillin showed slightly better results compared to coumarin. View Full-Text
Keywords: polyester dyeing; microemulsion; o-vanillin; coumarin; n-butyl acetate; kinetics polyester dyeing; microemulsion; o-vanillin; coumarin; n-butyl acetate; kinetics
►▼ Show Figures 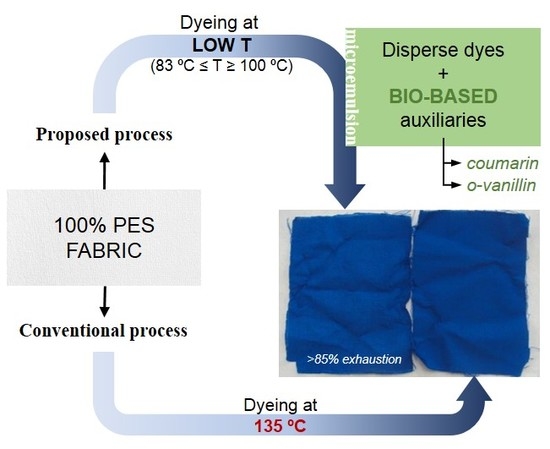