In the last few years, the thermoelectric properties of tin selenide (SnSe) have been explored in much detail due to its high efficiency and green nature, being free of Te and Pb. In the same chalcogenide family, SnSe2 is also a layered structured material, but its thermoelectric potential has not been widely explored experimentally. Since SnSe2 has the layered structure, its electrical transport properties may strongly be affected by its microstructure and morphology. Here, we report the effect of reaction time on the structure, phase, and morphology of the SnSe2 during solvothermal synthesis process. We have studied four SnSe2 samples with different reaction times. The sample obtained after 16 h of reaction time was named as M1, for 20 h M2, similarly for 24 h was M3 and for 48 hours’ time, the sample was named as M4. We investigated its thermoelectric properties and found that phase purity and morphology can affect the thermoelectric performance of the synthesized samples. The peak power factor (PF) value along the ab plane was (0.69 μWcm−1K−2) for the M4 sample at 575 K, which was the highest among all the measured samples. The comparatively larger PF value of sample M4 can be related to the increase in its electrical conductivity due to increase in phase purity and band gap reduction. View Full-Text
Keywords: thermoelectric; SnSe2; controlled morphology thermoelectric; SnSe2; controlled morphology
►▼ Show Figures 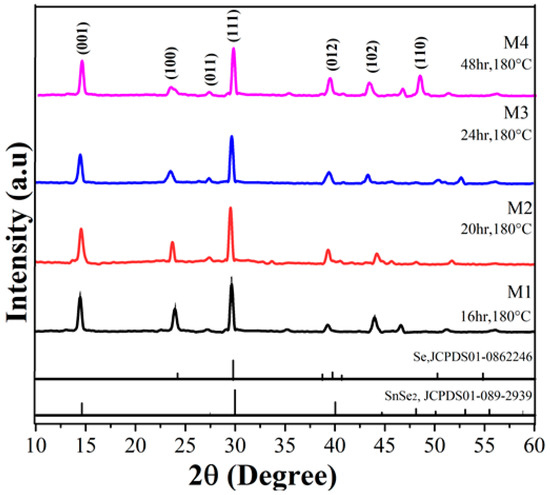