:
Portland cement concrete is known to have good fire resistance; however, its strength would be degraded after exposure to the temperatures of fire. Repeated low-velocity impacts are a type of probable accidental load in many types of structures. Although there is a rich body of literature on the residual mechanical properties of concrete after high temperature exposure, the residual repeated impact performance of concrete has still not been well explored. For this purpose, an experimental study was conducted in this work to evaluate the effect of high temperatures on the repeated impact strength of normal strength concrete. Seven identical concrete patches with six disc specimens each were cast and tested using the ACI 544-2R repeated impact setup at ambient temperature and after exposure to 100, 200, 300, 400, 500 and 500 °C. Similarly, six cubes and six prisms from each patch were used to evaluate the residual compressive and flexural strengths at the same conditions. Additionally, the scattering of the impact strength results was examined using three methods of the Weibull distribution, and the results are presented in terms of reliability. The test results show that the cracking and failure impact numbers of specimens heated to 100 °C reduced slightly by only 2.4 and 3.5%, respectively, while heating to higher temperatures deteriorated the impact resistance much faster than the compressive and flexural strengths. The percentage reduction in impact resistance at 600 °C was generally higher than 96%. It was also found that the deduction trend of the impact strength with temperature is more related to that of the flexural strength than the compressive strength. The test results also show that, within the limits of the adopted concrete type and conducted tests, the strength reduction after high temperature exposure is related to the percentage weight loss.
Keywords:
repeated impact; ACI 544-2R; high temperatures; fire; residual strength 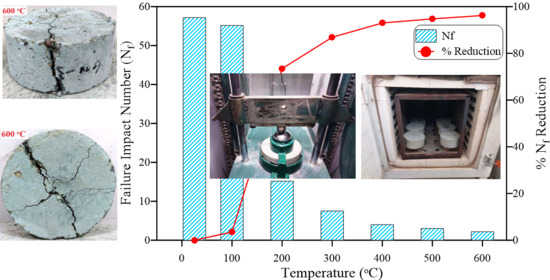 As stated previously, the experimental work presented in this study was conducted to be a reference work for future works where the post-fire residual impact performance of fibrous concretes will be assessed. Therefore, a normal plain concrete mixture was adopted in this study to investigate the effect of repeated low-velocity impacts on heated concrete. A cement content of 410 kg/m3 was used with 215 kg/m3 of water, while the fine and coarse aggregate contents were 787 and 848 kg/m3, respectively. Local crushed gravel and river sand from Wasit Province, Iraq, were used as coarse and fine aggregates. The maximum size of the crushed gravel was 10 mm. The chemical composition and physical properties of the used cement are listed in Table 1, while the gradings of both the sand and gravel are shown in Figure 1. All specimens were cured for 28 days in temperature-controlled water tanks.
The impact tests were conducted using the standard ACI 544-2R repeated impact procedure. However, instead of the manual operation of the test, an automatic impact machine was built for this purpose and used in this study to perform the repeated impact tests. The impact machine shown in Figure 2a was built to reduce the efforts and time of the test, where repeated impacts were automatically applied using the standard ACI 544-2R drop weight (4.54 kg) and drop height (457 mm), while the crack initiation and failure were observed using a high-resolution camera, as shown in Figure 2b. The same standard test setup was followed, where a steel ball was placed on the top of the 150 mm-diameter and 64 mm-thick disc specimen, while the drop weight fell directly on the steel ball that transferred it to the center of the specimen’s top surface, as shown in Figure 2c. Once the first surface crack appeared, the number of repeated impacts was recorded, which is termed as the cracking number (Ncr). After, the impact was continued until the failure of the specimens, where the failure number (Nf) was recorded.
In addition to the six impact disc specimens, six 100 mm cube specimens and six 100 × 100 × 400 mm prisms were cast from the same concrete patches, as shown in Figure 3. The concrete cubes were used to evaluate the compressive strength, while the prisms were used to evaluate the modulus of rupture. Previous researchers [36] showed that increasing the size of the cube specimen from 100 to 150 mm had no significant effect on the residual compressive strength after exposure to temperatures up to 1200 °C, while others [37] drew a similar conclusion for concrete cylinders having different sizes (diameter × length) of 50 × 100 mm, 100 × 200 mm and 150 × 300 mm. The cylinders were exposed to temperatures up to 800 °C. Several previous studies [38,39,40,41,42,43,44,45,46] adopted 100 mm cubes to evaluate the residual compressive strength of concrete.
Seven concrete patches were cast and cured in water tanks under the same conditions for 28 days, after which the specimens were left to air dry for a few hours and then dried in an electrical oven at 100 °C for 24 hours [15,47,48,49,50]. After the specimens were naturally air cooled, six of the seven patches were heated to temperatures of 100, 200, 300, 400, 500 and 600 °C using the electrical furnace shown in Figure 4a, while the seventh patch was left as an unheated reference. As shown in Figure 4b, a steel cage was used to reduce the destructive effects of the concrete explosive failure on the internal walls and heaters of the furnace. The heating process followed the heating and cooling procedure shown in Figure 5, where the specimens where heated steadily at a heating rate of approximately 4 °C/min until the target temperature. After, the specimens were thermally saturated at this temperature for one hour to assure the thermal steady state condition [51,52]. Finally, the furnace door was opened to allow for the natural air cooling of the specimens, which were left in the laboratory environment and tested the next day.
The heating rate can affect the residual strength of concrete exposed to temperatures exceeding 300 °C [53]. Previous researchers used different heating rates to evaluate the residual properties of concrete, which were as low as 0.5 °C [54] and 1 °C [55] and as high as 30 °C [56]. However, heating rates ranging from 2 to 10 °C were the most common in the literature [57], where a heating rate of 2 °C was adopted by [58,59], while 3 °C was adopted by [60,61], and 4 °C was adopted by [62,63]. On the other hand, 5 °C was used by [64,65,66,67], and 6 °C and 7 °C were used by [38,64,68], while other previous researchers [69,70,71] used a heating rate of 10 °C. In this study, a heating rate within this range, 4 °C, was adopted.

This section presents and discusses the obtained results from the conducted drop weight repeated impact tests that were carried out at ambient temperature and after exposure to different levels of high temperatures. The results of all specimens are listed in Table 2 together with the mean, standard deviation (SD) and coefficient of variation (COV) of each of the six disc samples. It is obvious that for all specimens, before and after exposure to high temperature, the recorded failure number was slightly higher than the cracking number, which reveals the brittle nature of normal concrete under impact tests [81,82,83].

Pictures for the disc specimens at room ambient temperature (R) and after exposure to 100, 200, 300, 400, 500 and 600 °C are shown in Figure 14a–g, both before and after impact testing. The fracture and failure of the reference unheated specimens align with what has been reported in previous studies [84,85,86,87,88] for plain concrete, where after a number of repeated blows, a small-diameter central fracture zone was created under the concentrated compression impacts via the top surface’s steel ball. After a few more blows, the internal cracks propagated to the surface, forming a surface cracking of two or three radial cracks from the central fracture zone, which formed the failure shape that occurred after a few additional blows, as shown in Figure 14a.
Figure 14b–d show that the specimens heated up to 300 °C exhibited a similar cracking and fracture behavior to that of the unheated specimens. However, at 200 and 300 °C, the cracking and failure tended to be softer, where the fracture started at much lower impact numbers, and the central fracture zone was smaller. The fracture of the specimens heated to temperatures above 400 °C is different. The material became so weak and absorbed the applied impact energy after being heated, where the cement paste became softer, the crushing strength of the aggregate particle reduced and the bond between them was almost lost. Due to these effects, internal thermal cracks were formed in the whole volume of the specimens. Therefore, for the specimens exposed to 400, 500 and 600 °C, only three impacts, two impacts and one impact were enough to cause the already existing cracks to appear at the surface. As a result, the central fracture zone was barely formed, and a higher number of major cracks (four or five) were formed accompanied by more hair cracks, as shown in Figure 14e–g.

Based on the obtained experimental results from the study presented in this work, the following points are the most important conclusions.

The authors acknowledge the support from Al-Sharq Lab., Kut, Wasit, Iraq, and Ahmad A. Abbas. 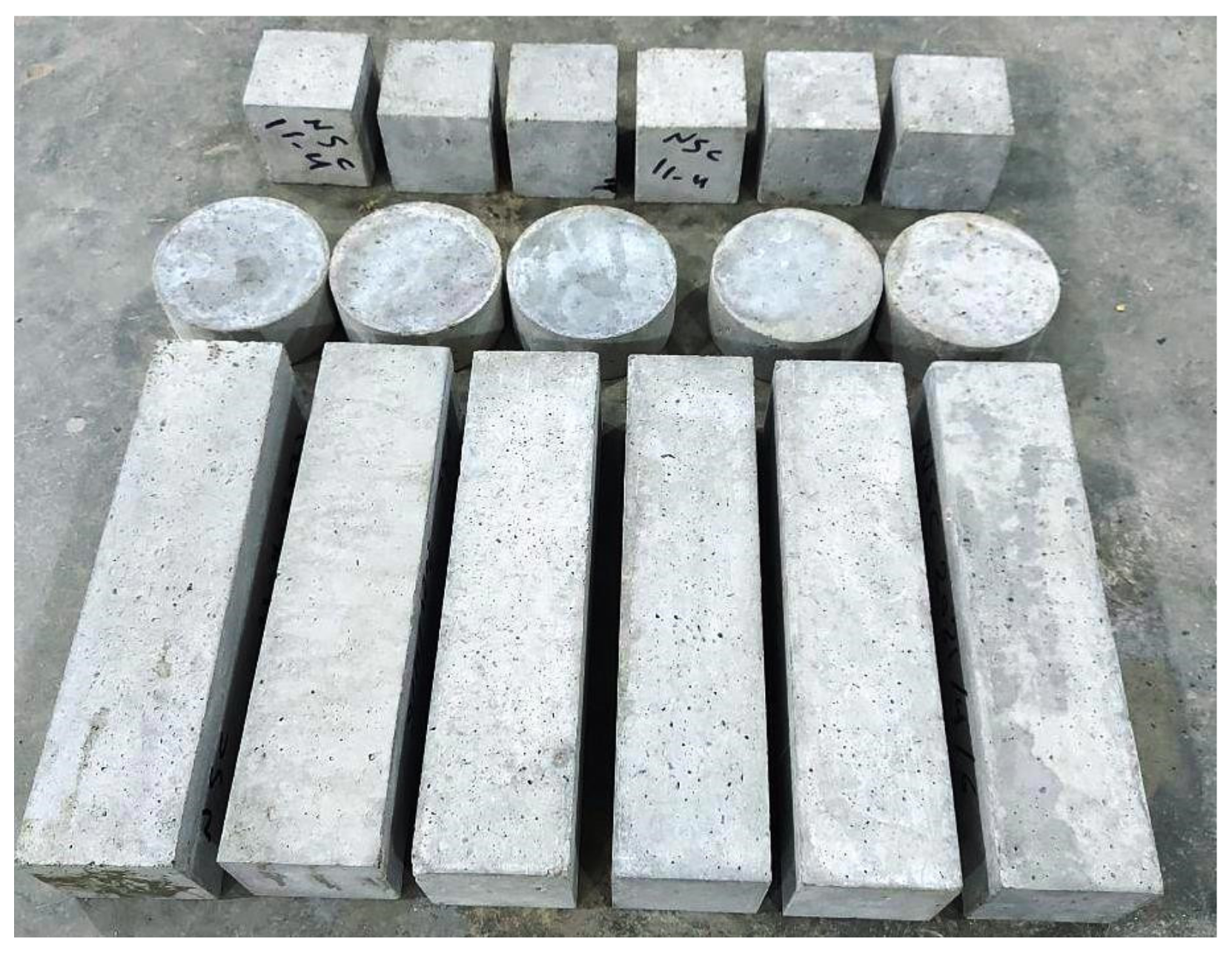 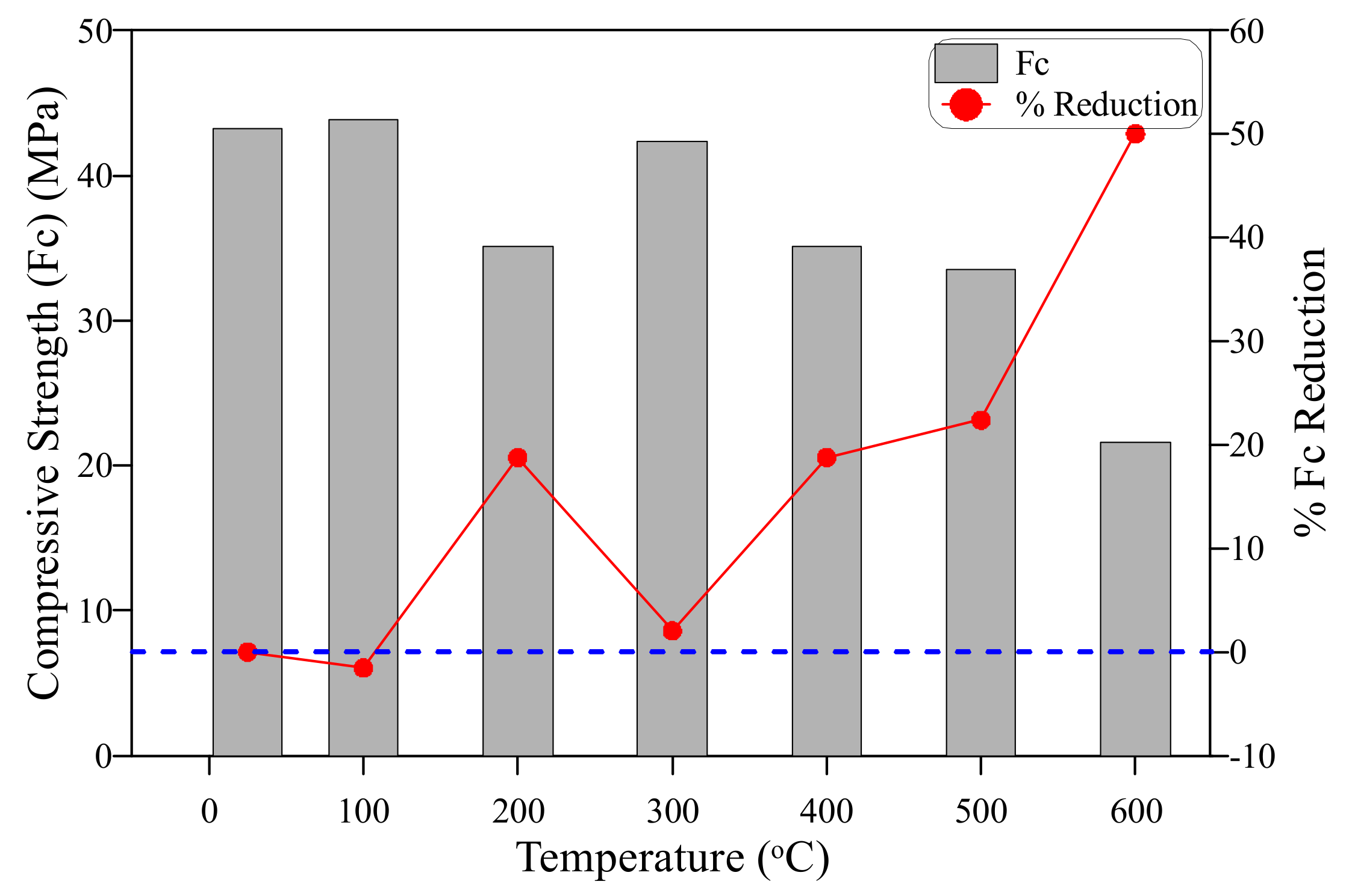 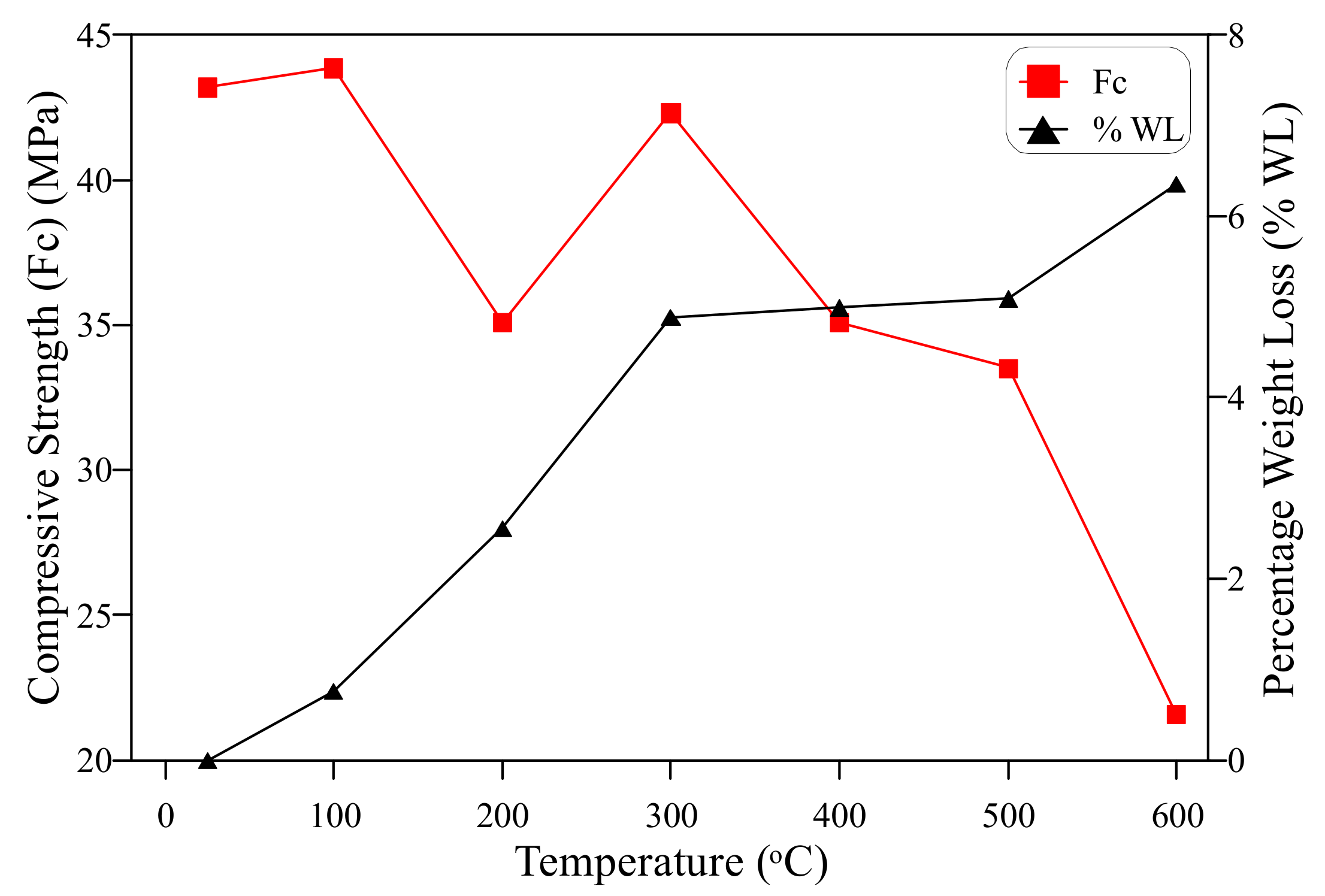 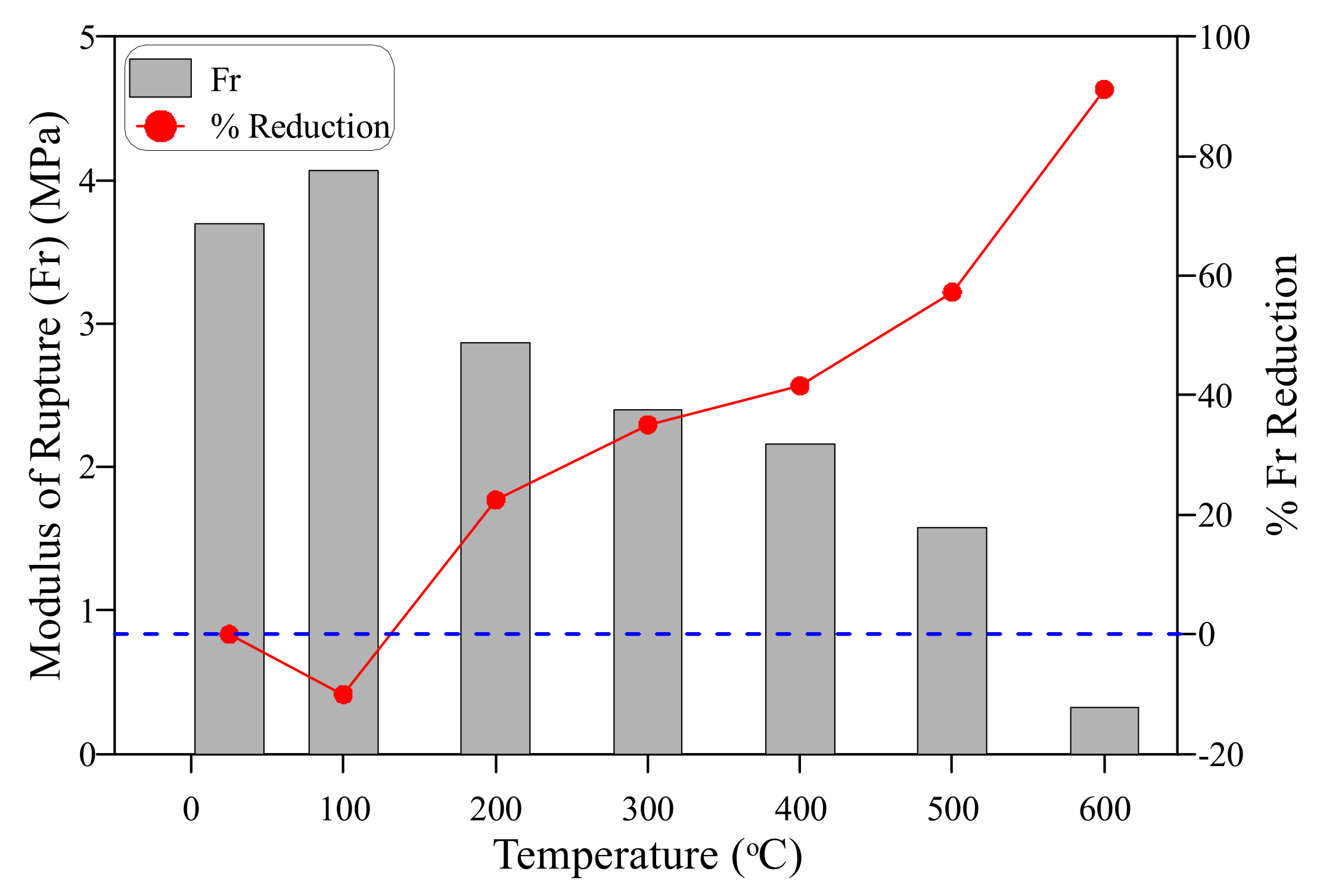 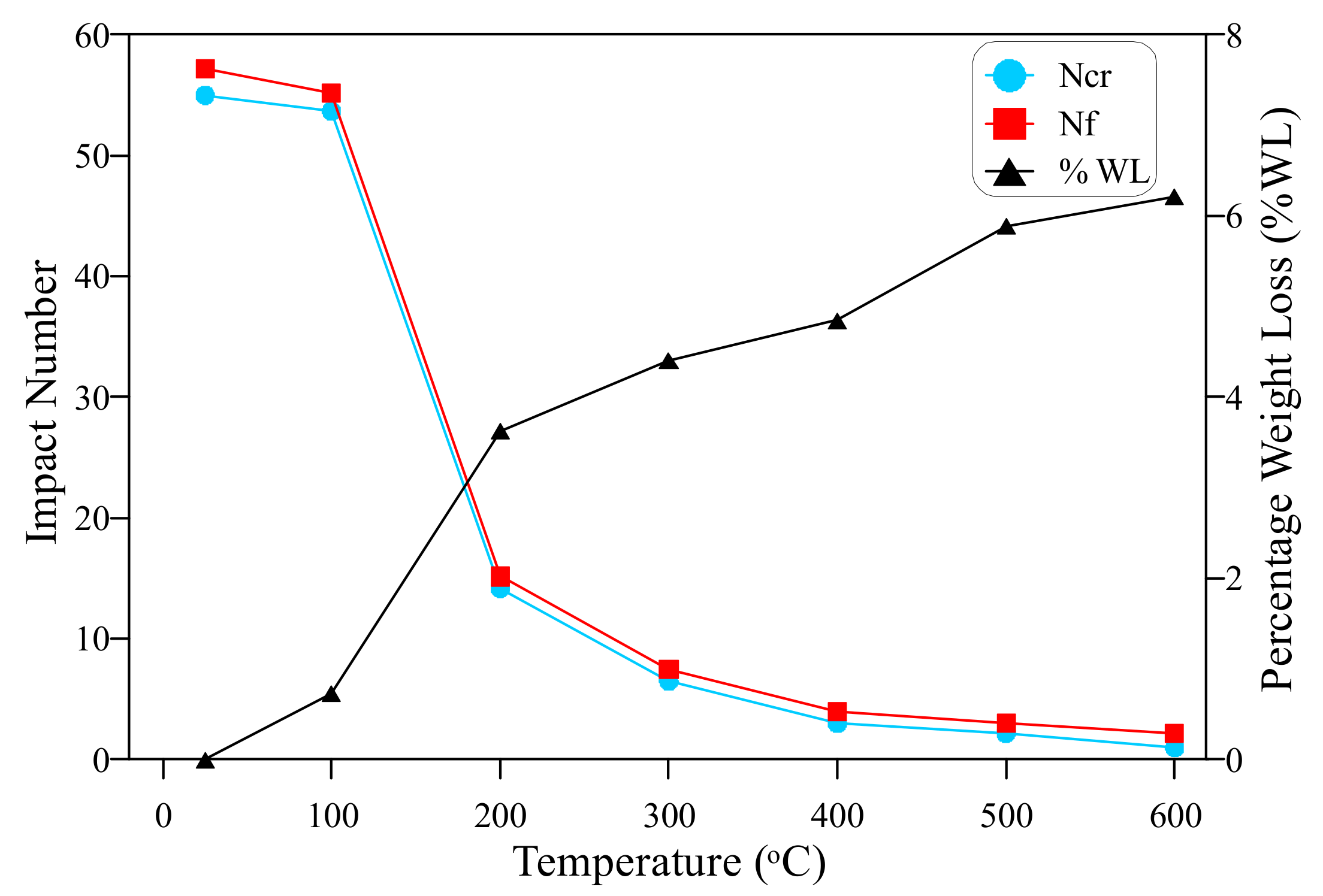 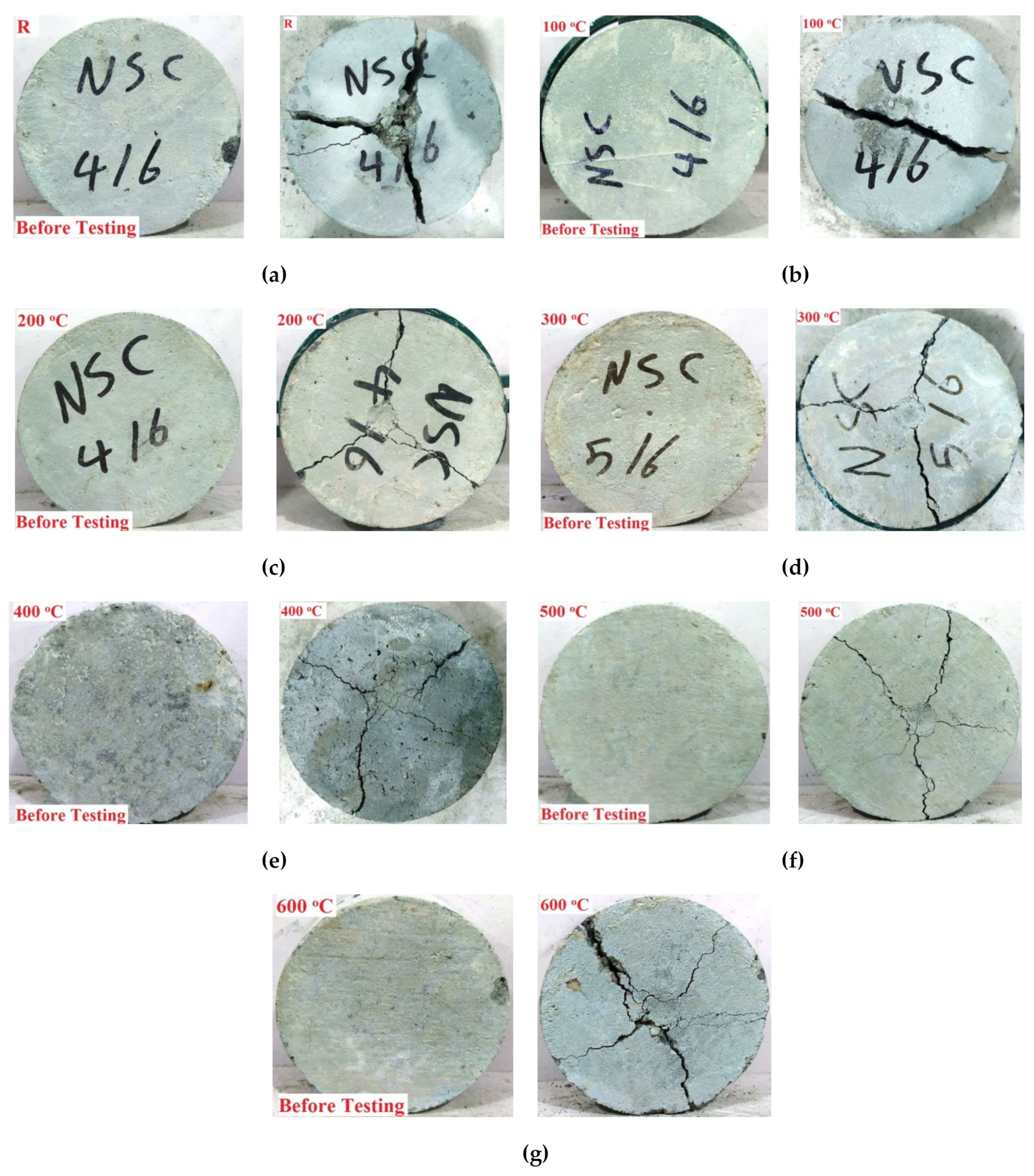 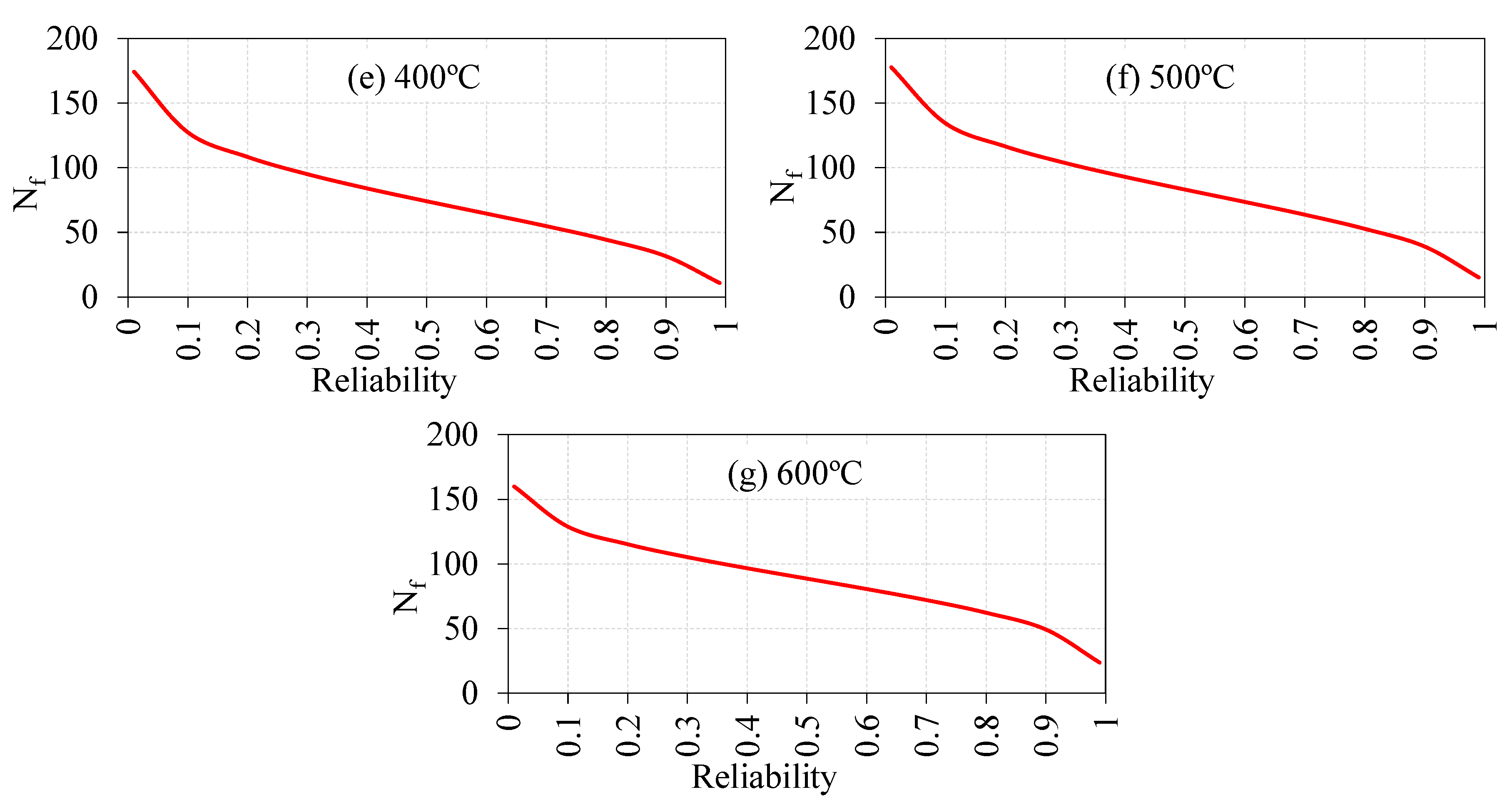