Influence of the Rake Angle on Nanocutting of Fe Single Crystals: A Molecular-Dynamics Study

Using molecular dynamics simulation, we study the cutting of an Fe single crystal using tools with various rake angles . We focus on the (110)[001] cut system, since here, the crystal plasticity is governed by a simple mechanism for not too strongly negative rake angles. In this case, the evolution of the chip is driven by the generation of edge dislocations with the Burgers vector , such that a fixed shear angle of is established. It is independent of the rake angle of the tool. The chip form is rectangular, and the chip thickness agrees with the theoretical result calculated for this shear angle from the law of mass conservation. We find that the force angle between the direction of the force and the cutting direction is independent of the rake angle; however, it does not obey the predictions of macroscopic cutting theories, nor the correlations observed in experiments of (polycrystalline) cutting of mild steel. Only for (strongly) negative rake angles, the mechanism of plasticity changes, leading to a complex chip shape or even suppressing the formation of a chip. In these cases, the force angle strongly increases while the friction angle tends to zero. View Full-Text
Keywords: molecular dynamics; nanocutting; iron; dislocations; cutting theory molecular dynamics; nanocutting; iron; dislocations; cutting theory
►▼ Show Figures 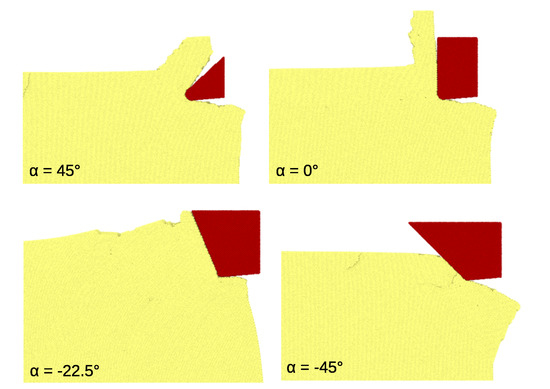